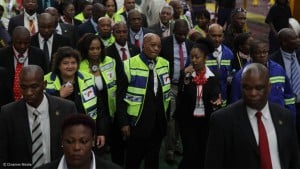 President Jacob Zuma has described Transnet’s first domestic production of electric locomotives in partnership with a Chinese railways group as a â€œsignificant stepâ€ in the evolution of Transnet Engineering into an original equipment manufacturer. He has also revealed that the African Union Heads of State had taken a decision to nominate South Africa to champion the manufacturing of rolling stock on the continent.

Zuma was speaking at a function to mark the delivery of 95 electric locomotives supplied to Transnet Freight Rail (TFR) in a manufacturing collaboration with CSR Zhuzhou Electric Locomotive, a joint venture between China South Rail (CSR), which holds a 70% stake, and black economicâ€“empowerment company Matsete Basadi.

Eighty-five of the locomotives had been built at Transnet Engineeringâ€™sKoedoespoort facility, which Zuma toured together with Public Enterprises Minister Lynne Brown and high-ranking Transnet executives, including CEO Brian Molefe. The first 10 locomotives were built at CSRâ€™smanufacturing facilities in China.

The contract, which was worth nearly R3-billion, was awarded in 2012 following a competitive bidding process.

CSR Zhuzhou Electric Locomotive had subsequently also been awarded a contract to supply a further 359 electric locomotives under the so-called â€˜10-64 contractâ€™ â€“ a R50-billion acquisition by Transnet of 1 064diesel and electric locomotives from North American and Chinese suppliers. CSR Zhuzhou Electric Locomotive would again build it units at the Koedoespoort factory.

The President was particularly enthused by the fact that 190 South Africans had been trained for theproject at CSR facilities in the Hunan province of south-eastern China. He argued that the investment in skills development would ensure that Transnet had the capability to effectively maintain thelocomotives over their economic lifespan.

The inclusion of black- and women-owned businesses in the assembly consortium was also lauded for its promotion of industrialization, as well as for integrating historically marginalised citizens into the mainstream of the economy.

Transnet reported that black-owned companies, such as Hermes Appollos, Thaleka Engineering and Mizana Engineering, had supplied various components and engineering services during the build programme.

Zuma said the fact that 85 of the 95 locomotives had been assembled in South Africa would build the manufacturingcapacity of the domestic rail industry.

â€œIt is also encouraging that of the total R2.7-billion contract value of this transaction, at least 65%, or R1.7-billion, was committed to local supplier development,â€ Zuma said, adding that technological transfer from countries such as Chinaremained essential to improving productivity and building world-class organisations.

He challenged local industry to advance from supplying inputs such as steel and other raw materials, to begin producing more sophisticated components, such as traction motors.

â€œOur aim is also to see the country building up the capacity and capability to manufacture its own locomotives in the future. We should be able to also export to other countries and especially to our neighbouring countries and the rest of the continent,â€ the President added.

â€œIn fact, a recent meeting of the African Union Heads of State took a decision to nominate South Africa to champion the manufacturing of rolling stock for the continent.â€

TFR had integrated 85 of the locomotives on to the manganese line to Port Elizabeth, as well as the iron-ore line between Sishen and ArcelorMittal South Africa’s plants in Newcastle and Bijlkor.

The group said the locomotives had already helped reduce cycle times between the mines and the Port Elizabethharbour from 86 hours to 72 hours and that, once all the locomotives were fully operational, the cycle timesÂ  should reduce further to 63 hours.