We have scanned the country and brought together the collective wisdom and expertise of transportation experts implementing Intelligent Transportation Systems (ITS) projects across the United States. This information will prove helpful as you set out to plan, design, and deploy ITS in your communities.

This document is one in a series of products designed to help you provide ITS solutions that meet your local and regional transportation needs. The series contains a variety of formats to communicate with people at various levels within your organization and among your community stakeholders:

ITS has matured to the point that you are not alone as you move toward deployment. We have gained experience and are committed to providing our state and local partners with the knowledge they need to lead their communities into the next century.

The inside back cover contains details on the documents in this series, as well as sources to obtain additional information. We hope you find these documents useful tools for making important transportation infrastructure decisions.

This case study is one in a series of documents that examines the use of Intelligent Transportation Systems (ITS) in work zones. More information on this system and other applications of ITS in work zones is available in the companion document, Intelligent Transportation Systems in Work Zones â€” A Cross-Cutting Study (Report No. FHWA-OP-02-025, EDL# 13600).

This case study reflects information gathered in interviews with key personnel on the Big I construction project in Albuquerque, New Mexico, as well as information and photos obtained during a site visit. The authors greatly appreciate the cooperation of the New Mexico State Highway and Transportation Department and its partners, who made the production of this document possible.

The New Mexico State Highway and Transportation Department (NMSHTD) rebuilt the Big I interchange in Albuquerque to make it safer and more efficient and to provide better access. The Big I is where the Coronado Interstate (I-40) and the Pan American Freeway (I-25) intersect in Albuquerque. The original Big I was designed to support an average daily traffic (ADT) of only 40,000 vehicles and was severely over capacity, experiencing an average of 1.7 crashes per day that were estimated to cost about $12 million annually (data from 1999). ADT in the interchange was approximately 300,000 vehicles prior to its redesign; the redesigned Big I has a design capacity of 400,000 ADT. The two-year project began on June 30, 2000 and involved 111 lane-miles of construction and 45 new and 10 rehabilitated bridges.

For the Big I project, NMSHTD employed ITS in the form of a mobile traffic monitoring and management system to help move the large number of vehicles through the extensive construction area. Mobile traffic monitoring and management systems use electronics and communications equipment to monitor traffic flow and provide delay and routing information to drivers and agency personnel. The ITS application deployed at the Big I in 2000 was used for the duration of the work zone (two years). The ITS components were deployed just prior to construction, with plans to incorporate portions of the system as part of a permanent ITS application for freeway management once construction was completed. Figure 1 shows some of the ITS equipment deployed at the Big I.

Figure 1 â€” Example of ITS equipment deployed at the Big I.
NMSHTD used ITS for this major construction project for several reasons, including:

The main goals of the ITS were:

The Big I ITS included a series of cameras and sensors to monitor traffic conditions and detect incidents, and electronic signs, highway advisory radio (HAR), a website, and other media to transmit traveler information. The incident detection capability was a major component of the system. To effectively use the system information to expedite incident clearance, NMSHTD made use of its motorist assistance program.

“ITS has been a very essential and integral part of the Big I Construction Project.” Rhonda Faught, Secretary, New Mexico State Highway and Transportation Department

Figure 2 â€” Highway Emergency Lender Patrol Vehicle
Instituted prior to the Big I project, the Highway Emergency Lender Patrol (HELP) program consisted of two vehicles patrolling the Albuquerque Metropolitan area. NMSHTD recognized that the Big I project would require more HELP trucks. The Federal Highway Administration provided $250,000 toward the purchase of two additional HELP trucks. The additional vehicles were purchased through the construction contract to help patrol the Big I project area during construction. The original two HELP trucks were then able to patrol the rest of the Metro area.

This section provides information on NMSHTD’s experience in bringing the system from the concept stage to fully operational.

The information provided was based on the incident type and severity.

Figure 4 â€” The Big I TMC System Description and Operations 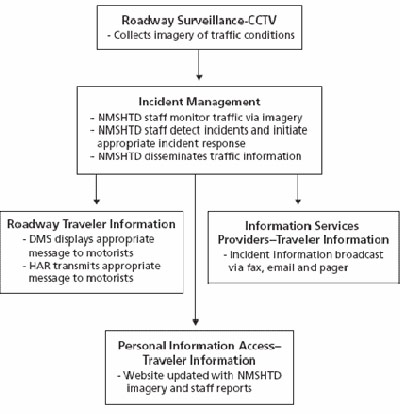 “We have received scores of thank you letters and emails from the public.”
Rhonda Faught, Secretary, New Mexico State Highway and Transportation

Department regarding the Big I website, which provided the public with real-time camera images.

Coordination with Key Personnel, the Public, and Other Agencies

NMSHTD staff identified three major benefit areas resulting from the Big I reconstruction project, which are listed below.
Mobility

Public Reception/ Reaction to the System