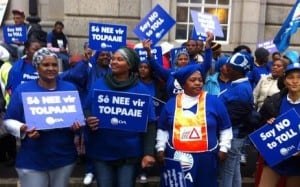 FILE: About 180km highway will be tolled should Sanral succeed.

They will be fighting it out over the proposed Winelands Toll Project.

Last week, the court dismissed an application by Sanral to try and have evidence belatedly filed from a board decision on the contentious project.

The city argued that the decision was taken by Sanral CEO Nazir Alli and not by the board which is required.

The party will submit its review application which Mayco Member for Transport Brett Herron says it has been preparing for the last three years.