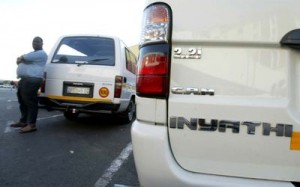 “Man, I tell you. I would not have thought of an idea of getting internet into a taxi. It is a novel move,” he said at the launch of the South African National Taxi Council’s (Santaco) Wi-TaxiÂ projectÂ in Orlando West, Soweto.

He said an urban province such as Gauteng should have a high rate ofÂ internet connectivity.

Vadi said he was looking forward to the day when a taxi driver would send his queue marshall an email telling him to inform his passengers that he would be delayed due to a metro copÂ roadÂ block.

He said the taxi industry needed a better communication strategy.

“Commuters want change in driver behaviour, consideration for the lives of people in the vehicles and respect for the law.”

He said the industry needed to be professionalised.

“You remain our most important partner in theÂ transportÂ industry. I see massive growth for the taxi industry because we are far away from having an advanced publicÂ transportsystem.”

He declined to comment on how much would be spent on theÂ project.

“It’s in the tens of millions.”

Each commuter would get 50 MB free a month.

Once they connected their device with the taxi’s wifi network, they would be able to use the 50MB in any taxi or rank which was connected.

Once that 50 MB was used up, a prompt would let the user know that the usage had run out. Users who wanted more access would have an option to buy more.

A total of 1 500 taxis and 50 taxi ranks in Gauteng would be fitted with wifi access point devices as of June.

The taxi council expected theÂ projectÂ to be completed within three years.