We canâ€™t stop the bus to suit a few 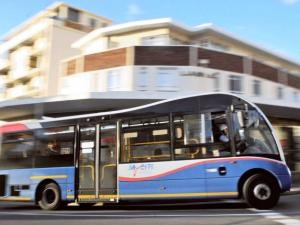 The MyCiTi project should integrate with the rail network and provide swift connections between major centres, says the writer. Picture: David Ritchie

Large-scale urbanisation, as well as the challenges of urban mobility and equitable access to economic opportunities, require the City of Cape Town to provide a public transport service that is reliable, frequent, affordable, safe and efficient. This service must also integrate with the rail network and provide swift connections between major centres.

While commuter rail is the backbone of our public transport network and remains the most efficient method of transporting large numbers of commuters, BRT is an affordable alternative.

Apart from BRT being able to provide mass rapid connections between major hubs, it can be implemented within a shorter time frame and for less than rail since it makes use of existing roadways or already proclaimed road reserves.

The success of a BRT system relies on a dedicated roadway (the red lanes), safe stations for boarding, pre-boarding fare-collection using a smartcard (myconnect card), universal access for people with disabilities and good distances between intersections and crossings.

With the implementation of Phase 1 of the MyCiTi project coming to conclusion, it is time to look to the next phase. In June 2014 we adopted a plan mapping out the public transport network that will be required to support a dynamic, sustainable, productive and growing Cape Town.

Included in those new MyCiTi routes are two trunk routes that make up the Lansdowne/Wetton Road Corridor (the LWC) â€“ which we have prioritised as Phase 2 of the MyCiTi project. These are the trunk routes that will provide residents from Khayelitsha to Philippi, Nyanga to Gugulethu, Mitchells Plain to Hanover Park, Wynberg and Claremont with a direct, efficient and scheduled public transport service.

In fact, the proposed LWC trunk routes will connect about 35 suburbs and 1.4 million residents along the way.

The concept planning for the trunk route that will connect with Wynberg proposes to use the South Road scheme, proclaimed in 1974, to access the Wynberg CBD. Within the road reserve are a number of suburban houses which will have to be demolished to make way for the roadway.

These houses were specifically acquired by the city, over many years, for the purpose of demolishing them when the time came to build the planned road. In the intervening period the city has offered leases on the houses so that they did not stand vacant for decades.

Those tenants have been given notice that the houses will be required for the roadway and some of the tenants have made outrageous claims â€“ including that the termination of their leases is equivalent to apartheid-era forced removals. The facts are that this is not subsidised housing for indigent people on the housing database. These are suburban houses that have been leased, at market-related rentals, to tenants who would not qualify for free or subsidised state housing.

Each of those tenants has signed a lease with the city, agreeing that the city may terminate the lease on conditions worded like this: â€œShould the premises be required by the Lessor within the period of the lease in connection with any scheme of town improvement or for any other public workâ€¦â€

Or in more recent leases: â€œThe Lessee acknowledges that this property has been acquired to be demolished for road construction/widening purposes and that Notice will be served on the Lesseeâ€¦ to terminate the lease and vacate the premises.â€

Moreover, 18 of the 26 affected tenants face termination of their leases regardless of the MyCiTi project for non-payment of their rent. Furthermore, some of the objectors have proposed that we instead use Wetton Road to access the Wynberg CBD. I want to assure them that the cityâ€™s transport engineers and planners have thoroughly canvassed all of the options for access to the Wynberg CBD, including the Wetton Road proposal.

The city does not have a wide enough road reserve on Wetton Road, nor do we own properties along this road. Using Wetton Road would probably require us to expropriate private properties, or servitudes across private properties, to accommodate the required widened road. This doesnâ€™t make sense when we already have a proclaimed road access along South Road as well as ownership of the properties needed to make way for the road.

The proposal to use the South Road Scheme to access Wynberg should not be confused with the conceptual plan to implement the Brodie/Main Road couplet in the Wynberg CBD.

A number of transport studies, done several years ago, have all concluded that the existing road network in the Wynberg CBD will be unable to accommodate future traffic demands. Successive governments had prepared for this eventuality by proclaiming several road schemes and two of these remain proclaimed today: the Main Road Widening Scheme (approved in 1955) and the second Wynberg By-Pass Scheme (approved in 1964/5).

About 14 years ago the city appointed consultants to prepare a Wynberg CBD Urban Renewal Plan. The plan established a vision and strategy for its revival, citing the solution of the transport issues as pivotal to the success thereof.

The by-pass scheme and the Main Road widening scheme were regarded as undesirable as it would have a significant negative impact on the areaâ€™s historical heritage and urban environment. It was proposed that the by-pass scheme and the road-widening scheme be abandoned and that a new relief road be investigated. It was out of this proposal that the Brodie/Main Road couplet was conceived.

Of a number of alternatives that were tested at the time, including improved traffic management, the Brodie/Main Road couplet was found to be the most suitable. The couplet was the least expensive solution for the revitalisation of Wynberg and the creation of economic opportunities.

It would also have much less impact on existing buildings than the proclaimed by-pass scheme (for which the city has acquired 130 properties over the years).

In November 2002, the Protea Subcouncil supported the Brodie/Main Road couplet proposal as the â€œlong-term conceptual plan for Main Road in Wynbergâ€ and recommended that the â€œcouplet be developed in phases as, if and when requiredâ€¦ and be accepted as the basis for the long-term road network development of Wynbergâ€, subject to a public participation process having taken place.

Once the MyCiTi trunk route buses have accessed the Wynberg CBD, it is essential that they are able to travel through the CBD efficiently. The Phase 2 concept plan proposes that the couplet is now required and that it be built to improve traffic flow for private vehicles as well as the public transport vehicles.

Although the 2002 recommendation by the subcouncil is not binding on the city, we will follow an extensive public participation process on the proposal to implement the couplet before finalising the detailed design of the Wynberg CBD portion of the MyCiTi route.

Over the last few months we have witnessed how those who are opposed to the Brodie Road couplet have misrepresented what we are proposing â€“ even distributing a map that was manipulated to exaggerate the extent of the proposed new road â€“ and have labelled the Brodie Road couplet as a â€œmassive highwayâ€. While the couplet will impact some property owners, it is not a massive highway.

There are good examples of how couplet schemes have been successfully employed in Cape Town to improve traffic flow; enhance pedestrian movement; protect heritage buildings; and support thriving commercial activity â€“ the Long/Loop Street couplet in the city centre is but one.

Implementing the couplet would satisfy BRT requirements and make for a viable MyCiTi service for a substantial number of residents who depend on public transport.

At the same time, it would finally resolve the long-term traffic-flow constraints in the Wynberg CBD and kick-start the urban renewal process identified in the Urban Renewal Plan of 14 years ago.

We all share the responsibility to remedy the apartheid spatial patterns and remove the barriers to access to opportunities, amenities and services. This is pivotal for the long-term economic and social sustainability and liveability of our city.

The Lansdowne/Wetton Corridor represents an investment of over R4 billion in infrastructure costs alone and we have one opportunity to get it right. No transport project of this scale can be implemented without some impact on the residents who live in or close to the proposed route and we will do our best to limit that.

However, we cannot seriously be asked to compromise the essential transport services for over a million potential commuters to suit a few. No matter how we deviate from the route, it will impact on others and the pattern will simply repeat itself.

We have a responsibility to address the gigantic challenges of access, equality and poverty, and we cannot be held back.