A driver suddenly encounters a patch of black ice and skids or runs into a dense fog and slows down. The vehicle automatically transmits a warning to other vehicles, avoiding an accident. Or perhaps, an emergency vehicle is about to enter an intersection. The emergency vehicle alerts all drivers in the area to avoid a collision.

These are just some of things that will result from vehicle-to-vehicle and infrastructure-to-vehicle communication technology being developed as part of the the Vehicle Infrastructure Integration (VII) initiative. Participants include the U.S. Department of Transportation, the American Association of State Highway Transportation Officials; the transportation departments in Michigan, California and Florida; and BMW, DaimlerChrysler, Ford, General Motors, Honda, Nissan, Suburu, Toyota and Volkswagen. 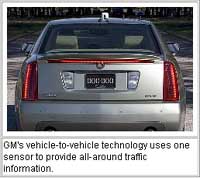 The Federal Communications Commission has dedicated the 5.9-gigahertz frequency exclusively for transportation-related communications that can transmit data over distances of up to 1,000 meters (3,280 feet) between vehicles and with roadside units (RSU).

The VII is currently installing the first DSRC test sections on Interstate 101 and University Avenue in Palo Alto, California. If the results testing shows that the system is possible technicaly, economically and politicaly, DOTs will spend two years or so installing up to 300,000 RSUs along main traffic arteries throughout the U.S. This decision is expected in 2008 or 2009.

Each RSU is equipped with the broadband DSRC wireless technology so it can broadcast traffic, safety and other information to passing vehicles. Also vehicle manufacturers will start install DSRC technology in vehicles.

With DSRC, each individual vehicle is both a transmitter and receiver of information. Transmissions are totally automatic with drivers not having to do anything. Exchange of data among the vehicles takes place via ad-hoc networks, short-distance wireless radio connections formed spontaneously among the vehicles as needed. They can act routers to forward information to other vehicles. Using this multi-hopping capability, information can be relayed over distances of up to a quarter mile even where there are no RSUs. Pile-ups on congested roads during rush hour due to a chain reaction rear-end collisions could be lessened. As for privacy concerns, data is transmitted between vehicles and RSUs is anonymous. 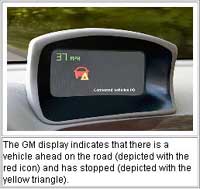 GM’s V2V system consists of a roof-mounted transponder, antenna, and communications chip. This allows a vehicle to broadcast its location and monitor the positions of hundreds of other cars with the same capability 10 times every second. In one demonstration, a Cadillac CTS was driven at 35 mph directly into the path of a parked Cadillac CTS without touching the brakes. As the approaching CTS drew closer to the parked car, a green vehicle icon on a dash-mounted monitor used to indicate the CTS speed and the distance between vehicles turns to yellow.

At about 30 yards out, the icon turns red and the parked vehicles turn signals and brake lights flash in a rapid warning sequence. A second later, the brakes seize control of the moving CTS and pull it to a stop 15 ft. short of the parked car.

V2V systems could overcome blind spots such as when turn or passing. If a driver engages a turn signal, and there is a vehicle in his or her blind spot, the system sends a vibration through the driver’s seat. The V2V system will determine whether or not to apply the brakes using algorithms that calculate the moving car’s speed and its time to impact. The same algorithm can trigger the taillights to flash to prevent chain-reaction rear-end collisions.

In addition, GM’s V2V technology can warn the driver when vehicles ahead, regardless of lane, are stopped or traveling much slower or any vehicle ahead brakes hard, allowing the driver to brake or change lanes as needed. It also can use rear lights to warn the other driver when the approaching vehicle is moving very quickly and a rear-end collision is imminent.

The list of potential applications that can save lives and reduce gridlock is quite long.

This includes intersection collision avoidance including cases when someone runs a red light or stop sign.

It could bring warnings into the vehicle about emergency vehicles entering an intersection, for example. It could also provide information on critical road conditions like a narrowing curve, slick icy patches on a bridge, construction zones, traffic jams or accidents or a highway-rail intersection warning.

Though not safety or traffic flow related, DCRC could be for infotainment services to transmit digital music, movies or map updates for the on-board navigation system. Indeed, the latter could help pay for developing and implementing the safety application as well as help increase its acceptance among customers.