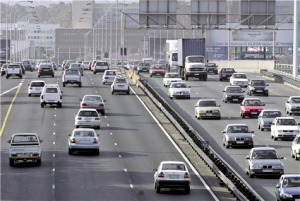 The positive impact of the improved freeway network for road users was strongly underlined in the presentation the South African National Roads Agency (Sanral) made to the Gauteng Review Panel in Pretoria today.

While the main routes remain busy, congestion has been eased, bringing down stress levels and travel times. For example, in 2007 congestion on the N1 southbound occurred between 15h30 and 18h30. If there had been no upgrading of the road, the peak period would have spread to the whole afternoon.

Improvements brought down these levels.

Upgrading of the interchanges on the network has similarly brought positive results, even where congestion was at its worst. Thus, access improvement, for example, off the N1 on to William Nicol Drive was 25%, for Rivonia it was 38% and 32% for Malibongwe.

It is no wonder, then, that average speeds on the highways improved. Thus a TomÂ Tom traffic study in 2012 found the average speed through the previously heavily congested Allandale Interchange had risen to 70 km/h. This improvement in speeds and thus travel times came down despite a 28% increase in traffic volumes.

Another study, the IBM Global Commuter Pain Survey, revealed Johannesburg was one of 14 cities surveyed that experienced improvements in traffic flow between 2010 and 2011, easing the pain of being in heavy traffic.

Not only did travel times and stress levels come down, but it is also considerably safer on the improved highways. A rapid response system is in place and results show the average duration from the occurrence of an incident to its clearance has been reduced by some 30%.

It is no surprise that feedback from the public was positive â€“ 8Â 820 incidents were attended to, while paramedic assistance since April 2013 was provided at 3Â 380 incidents.