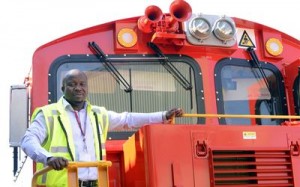 Transnet has introduced cranes and locomotives that use the latest available technology. Picture: ARNOLD PRONTO

STATE-owned transport utility Transnet will need up to 66% more energy than its present consumption levels if it is to implement its capital expenditure plans, which are vital to powering South Africaâ€™s economic growth.

The company plans to spend R300bn over the next seven years to improve its infrastructure.

Transnet GM of public policy and sustainability Sue Lund told the Africa Energy Indaba in Sandton on Wednesday that the group had reduced its energy consumption by 3.4% in the past financial year, largely because of the introduction of cranes and locomotives that use the latest available technology.

Security of supply constraints will affect its ability to implement its infrastructure plan. New investment to boost rail, port and pipeline capacity is critical to lowering transport costs in South Africa, and boosting economic growth.

The government has tasked Transnet with driving transformation, job creation and industrialisation. In 2012-13, energy constituted 16% of Transnetâ€™s total generating costs. This will rise once the Treasuryâ€™s carbon tax is introduced.

However, an internal energy and carbon strategy aims to manage this, even though freight volumes moved by Transnet are set to increase.

Transnetâ€™s energy strategy, Ms Lund said, would focus on security of energy supply, the cost of energy and reducing the utilityâ€™s carbon emissions. “We are going to have to manage our energy use more optimally to create a better outcome,” she said.

The energy gains were largely a result of new-generation locomotives being introduced on the coal and iron-ore lines.

The new locomotives had regenerative braking capabilities. The regenerated electricity was transmitted back into Eskomâ€™s grid if not immediately required.

New cranes introduced at ports such as Durban and Ngqura, also had the ability to regenerate electricity, although only smaller amounts were reused.

The benefits of shifting freight from road to rail would have other transport-related spin-offs such as reduced road congestion and accidents, and less maintenance on road surfaces. Costs, particularly for movers of bulk commodities, would also drop. Rail transport is regarded as three to four times more efficient than road.

About 10% of South Africaâ€™s total carbon emissions were from the transport sector, according to the annual State of Logistics survey. Transport consumes about 2% of total electricity.

The energy savings in 2012-13 resulted in a 2% drop in its carbon emissions. Improving volumes on rail and reducing the number of trucks on South Africaâ€™s roads could reduce the sectorâ€™s carbon footprint by about 3.8-million tons by 2020, Ms Lund said.

Transnetâ€™s annual report states that moving 100 tonnes of cargo by road between Durban and Johannesburg burns 4.8 tonnes of carbon dioxide. By rail, this figure drops to 1.3 tonnes.

Research and development at Transnetâ€™s engineering division are exploring approaches to energy efficiency. Ms Lund said the use of fuel cells, biofuels and even gas were being researched.