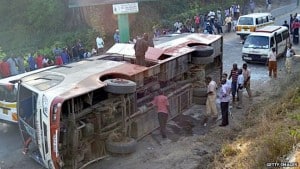 A bus that overturned on the way to the airport in Mombasa. No one was killed – but many others are not so lucky. Africa has only 2% of the world’s vehicles – yet 16% of road traffic deaths.

Nairobi’s roads are renowned for their chaos.

Cars, lavishly decorated buses, reckless matatu minibus taxis, and daredevil motorbike riders intermingle with the odd herd of cows to create a gridlocked maze, and a nightmare for the commuter trying to get home.

Not only is the transport sector in much of Africa similarly chaotic, it is also notoriously dangerous – Africa has the highest rate of road traffic fatalities in the world, accounting for 16% of the world’s road traffic deaths, despite being home to only 2% of the world’s vehicles.

Compared to the global average of 18 road traffic deaths per 100,000 members of the population, the region sees an average of 24.1 deaths for each 100,000 people – a significantly higher figure.

A rising number of young start-ups are working to make sense of the madness, creating new technology-based solutions to simplify transportation in African cities, and improve safety.

While taxi app Uber is rushing to launch in Africa, taxi-hailing technology is already popular in Kenya, tapping into the country’s famous love of novel mobile solutions.

According to Lauren Gray, marketing director at local mobile taxi-hailing service Easy Taxi, innovative uses of technology are key to improving the taxi-transportation market in Kenya.

“Technology allows for greater monitoring within the taxi transportation market. This is beneficial for the end consumer, as higher quality services are guaranteed and services are brought to consumers with both transparency and accountability,” she says.

By using mobile technology, Ms Gray says the lack of reliable transportation in Nairobi can be addressed, and security can be improved – a key concern in Kenya.

“Customers [in Nairobi] have become used to knowing that if they need a driver to take them to a destination, it would need to be planned hours in advance and require calling multiple drivers to see who is available, who is nearby, and who will charge the lowest price,” she says.

“In addition, customers are very wary of taking rides with drivers they do not know. This is because of the lack of reliability but also due to security concerns. These gaps are what technology within the taxi transportation sector and Easy Taxi is capable of addressing and changing.”

Boasting the largest taxi network in Nairobi, and ferrying thousands of passengers to their destinations each month, Easy Taxi’s localised taxi-hailing app is widely used in Kenya’s capital, and poses the biggest competition to Uber’s African expansion.

Mobile technology is also being used to shake-up another of Africa’s favourite forms of transport – the motorcycle taxi, known as the boda boda.

“Technology can help the market serve customers better and SafeBoda is working on exactly that,” he says.

“The larger [question] is how can we use low-cost transportation and technology to improve the rapidly growing cities of Africa and other developing regions.”

Dubbing itself the “Uber for motorcycle taxis”, SafeBoda allows consumers to call a network of motorbike drivers via a mobile app.

However, as the name suggests, SafeBoda also goes a step further, providing training for company drivers in first-aid, road safety and motorbike maintenance.

Another way transport technology can support economic growth in Africa is through job-creation, according to Mr Sussock.

“It’s about reforming transport to create more jobs and more efficient outcomes for users and for cities,” he says.

“No one should want technology to replace people – we need businesses that will decrease the large unemployment numbers in cities across Africa.”

According to Neil du Preez, founder of South African company Mellowcabs, people need to start focusing on ways to use technology to stem the environmental impact of transportation, particularly as cities grow and congestion worsens.

“The more the world urbanises – and we’re forecast to be 70% urban-dwellers by 2050 – the more critical clean, efficient, safe transportation becomes,” he says.

The Mellowcabs team are implementing technology in every aspect of their fully-electric three-wheeled electric taxis, which are currently in the testing phase.

The cabs convert the kinetic energy that is usually lost in the braking process into electricity and stores it, improving energy efficiency. An LED light system is installed in the shell of the vehicle, illuminating the body of the vehicle, making it more visible as well as being aesthetically pleasing.

The vehicles are hailed using a mobile app, which allows customers to see where their taxi is, pay with a bank card, and rate drivers.

They are also fitted with consumer friendly technology such as in-vehicle charging points, wifi, and entertainment tablets – aiming to create the perfect tech-savvy ride for Africa, when they hit the roads of South Africa.