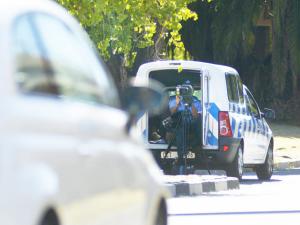 STICK TO SPEED LIMIT: A traffic officer with a speed trap keeps an eye on motorists in Nelson Mandela Boulevard this week. Transport Minister Dipuo Peters said yesterday the surge in accidents and deaths since December 23 was worrying. The Western Cape had one of the lowest death tolls with 91, while KwaZulu-Natal had the highest with 249. Photo: Armand Hough

A TOTAL of 1 143 people have died in 924 crashes during the festive season up to December 28, Transport Minister Dipuo Peters said yesterday.

KwaZulu-Natal had the most fatal accidents with 249 deaths from 211 crashes, Peters said in Durban. In Gauteng there were 174 deaths from 156 crashes. The Eastern Cape had 161 deaths from 129 crashes.

The North West had 82 deaths from 61 crashes and the Northern Cape 37 deaths from 30 crashes.

Peters said while there was a decrease of 50 fatal crashes and 25 deaths compared to the same period last year, the surge in accidents and deaths since December 23 was worrying.

She said it was striking that 31 percent of all the fatal crashes took place between 10pm and 6am, and 80 percent took place in built-up areas.

During the period ending on December 28, 415 people were arrested for speeding, with the highest speed recorded at 265km/h in the Free State.

Some 904 people were arrested for drunk driving.

Peters urged tavern owners to take greater responsibility for ensuring their patrons did not drive or walk home drunk.

Peters said there were still far too many deaths.

She recently visited a Durban hospital where nine of the hospitalâ€™s intensive-care unit beds were filled with car crash victims. â€œWe cannot forever be standing on the road counting dead bodies,â€ she said.

Meanwhile, the City of Cape Town has advised that it will manage the influx of vehicles along the Atlantic Seaboard on New Yearâ€™s Day.

â€œWe implemented a similar traffic management plan on the Day of Goodwill and succeeded in preventing a repetition of the gridlock conditions that have become a regular occurrence in Sea Point, Bantry Bay, Clifton and Camps Bay on December 26 in previous years,â€ said the cityâ€™s Mayco member for transport, Brett Herron.

Herron advised beachgoers to park their vehicles in the CBD or foreshore area and to use the MyCiTi bus service or any other form of public transport to reach the beaches along the Atlantic Seaboard tomorrow.

The traffic will be managed at the main entry points to the Atlantic Seaboard from 9.30am until 7pm at the following points:

l It will also be managed at the corner of Victoria and Houghton roads in Camps Bay.

l At the corner of Camps Bay Drive and Dal Road for traffic heading in the direction of Camps Bay.

l At the corner of Queens and Regent roads in Sea Point for traffic heading in the direction of Camps Bay.

l At the corner of Lower Kloof Road and Kloof Road, also for traffic heading in the direction of Camps Bay.

For more information contact the cityâ€™s Transport Information Centre at 080 065 6463.