State banks on bypasses, BRT and expressway to decongest city 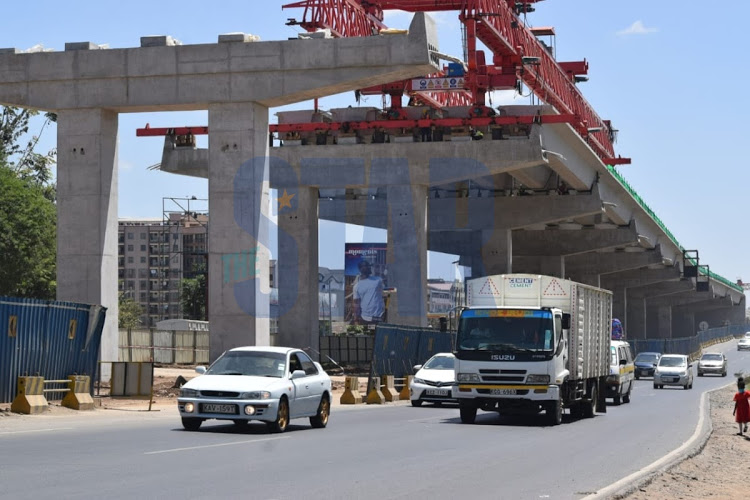 In Summary
•The construction of BRT and JKIA-James Gichuru expressway are ongoing.

•Southern, Northern, and Eastern bypasses have been completed. The missing link is the Western Bypass which the contractor has confirmed will be completed by December.

The state has intensified investment in road projects around the city to unlock traffic jams.

Traffic snarl-ups in the metropolis are estimated to cost the country Sh2 billion annually.

Transport CS James Macharia on Friday said the state has intensified the construction of roads going circular to the city in a bid to open up the city.

“We have done the Southern, Northern and Eastern bypasses. The missing link is the Western Bypass which the contractor has confirmed will be completed by December,” Macharia said.

Macharia said the circular ring around the city will help motorists avoid unnecessary jams in the CBD.

The CS who was inspecting the Western bypass said he was happy with the progress after the contractor confirmed they will complete it in the next five months.

“We have seven interchanges in the design. This is a very expensive road  in terms of the design and where it passes through; it is a very critical link which will make a difference not only in this area but the entire city of Nairobi,” he said.

It passes through several towns such as Gitaru, Wangige, Ndenderu and Ruaka. It is the fourth and final ring road in the Nairobi Ring Road Network Masterplan.

The Sh17 billion project works include the construction of a 15.3km dual carriageway and about 17.31km of service roads.

Construction began on March 15, 2019, and was projected to be completed in 39 months. It is being funded by the China Exim Bank and the Kenyan government.

The contractor is China Road and Bridge Corporation.

The bypass transverses Kabete and Kiambaa subcounties in Kiambu county.

The Southern Bypass has eased traffic within the city, with trucks ferrying goods such as fuel avoiding the CBD.

The CS said the Western Bypass will complete the circle.

Macharia said challenges to do with the land acquisition will be dealt with.

With an overall 63 per cent completion rate, the contractor has so far received payment equivalent to 30 per cent of the contract sum.

Section III (from Ndenderu to Ruaka) is 60 per cent complete.

The fourth and sixth instalments that would amount to 60 per cent of the total are being processed.

The National Land Commission has processed 20 acres needed for the project amounting to Sh1.87 billion.

The Kenya National Highways Authority has dispensed a total of Sh520 million to the NLC for compensation of persons affected by the project.

NLC issued a Notice of Taking Possession for 34 plots on July 1, out of the 37 plots that were pending.

The project still requires an additional Sh1.36 billion to clear the pending land compensation. KeNHA has set aside Sh1 billion in its budget for the same.

Several changes have been instructed to the initial preliminary design. Wangige, Ndenderu, Ruaka, Rumenye interchanges have additional retaining walls, service roads, and geometry of the road.

Other strategies being put in place to open up the city include the anticipated bus rapid transit being undertaken by the Nairobi Metropolitan Area Transport Authority.

NaMATA was established by President Uhuru Kenyatta on February 9, 2017.

The authority is mandated to establish an integrated, efficient, effective, and sustainable public transport system.

Five corridors have been identified by authorities to decongest Nairobi roads. The corridors are to be marked in red lines.

Line one is to run from James Gichuru Road-Waiyaki Way to JKIA, a distance of 20km.

Line three will run from Githurai through Thika Road to Moi Avenue in the CBD, ending at Kenyatta National Hospital.

The construction of a Sh62 billion expressway which is ongoing is also part of the government’s efforts to decongest the city.

With the completion of the multibillion-shilling project, it will take 15 to 20 minutes to cover the 27-kilometre stretch from African Inland Church, Mlolongo to James Gichuru on Waiyaki way.