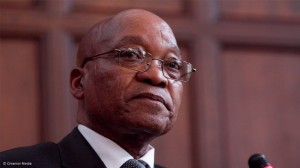 South Africa has said proposals to scale-up Chinese investment in the country will be on the agenda when the countriesâ€™ leaders meet to review bilateral relations next week.
Photo: Duane Daws

South African president Jacob Zuma and his Chinese counterpart Xi Jinping, who will hold talks in China on 4 and 5 December, â€œare also expected to review progress on cooperation in infrastructure developmentâ€, the agency said.

According to the South African government, total trade with China is on â€œa steady upward growthâ€, with trade in 2013 totalling 192 billion rand (ZAR) ($17bn), â€œalbeit skewed in Chinaâ€™s favourâ€. To date there are 39 Chinese companies investing in the country with a capital expenditure of ZAR 14.7bn ($1.3bn) between January and September 2014.

South Africaâ€™s trade and industry minister Rob Davies said on 27 November that the value of the countryâ€™s total international trade has grown from ZAR 121bn ($11bn) to ZAR 271bn ($24.5bn) by the end of last year. Davies said: â€œThe trade balance has been in favour of China since 2008 due to the composition of trade between the two countries where South Africa exports primary products and commodities to China.â€

In 2010, China and South Africa signed a general co-operation agreement in the field of energy, covering oil and gas, renewable energy, energy efficiency and skills development.

The African Development Bank has said trade between China and Africa grew by 20% in 2012 to reach $26.4bn. At the end of 2012, Chinese investments in Africa totalled $20bn.

The â€˜World Investment Report 2013â€™, published by the UN Conference on Trade and Development (UNCTAD) (264-page / 2.18MB PDF), said Chinese foreign direct investment (FDI) stock in Africa at the end of 2011 stood at $16bn. South Africa was the leading recipient of Chinese FDI, according to UNCTAD.