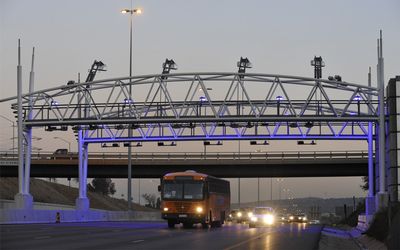 The Presidency has reiterated that buses and taxis are exempted from paying e-tolls.

The high office on Friday said it had noted that tolling, like all other measures that add to the already existing financial commitments of consumers, has been met with some uneasiness and unhappiness.

In a statement released today, the Presidency said: “Some bits of information that are important for consumers to know appear to have not found way into the public domain in a visible way. One is that workers travelling in buses and taxis are exempted from e-tolls.

“These modes of transport pass through the gantries free of charge. Transport services in South Africa are ably supported by the minibus taxi industry, ferrying about 60% of the population in Gauteng daily. They form an integral part of the integrated transport system value chain.”

The Gauteng provincial government has also upgraded alternative roads to assist those not wanting to use the tolled roads.

Government has adopted the “user pay” principle to enable the speedy and efficient delivery of transport infrastructure.

The Gauteng government has outlined the roads that have been upgraded, which provide alternatives. These include the following;

The R55 that runs parallel to the N1 from Woodmead, Sunderland Ridge, Laudium and Pretoria West. It also links well with the Mabopane Freeway. This is a high quality, dual carriage road and it is not tolled.

The M1 between Woodmead Drive and Corlett Drive was upgraded at a cost R86 million into four lanes, thereby easing traffic on the busiest section of the Gauteng freeway network.

For motorists travelling from the south of Johannesburg, the R82 – the Old Vereeniging Road – has being developed into a dual carriage way between Eikenhof and Walkerville. The N12 near Lenasia/Eldorado Park has been widened into three lanes each way and the Golden Highway has been rehabilitated.

The R25 between Bronkhorstspruit and Kempton Park has been rehabilitated.

There is a much broader infrastructure plan, emphasising rail as the backbone to assist commuters even further.

As part of the massive infrastructure programme, government is determined to make rail transport the backbone of public transport in Gauteng.

The R30-billion Gautrain project is now fully functional and carries over 1.2 million passengers per month and 50 000 a month. Its feeder bus system transports 350 000 passengers monthly.

The Gautrain is a reliable, safe and affordable mode of transport that compares favourably with the best in the world.

The Passenger Rail Association of South Africa (PRASA) will spend over R120 billion over the next 10 years to buy new trains. A total of 2 800 trains will be delivered next year in Gauteng.

Johannesburg, Tshwane and Ekurhuleni all have detailed plans to roll-out the Bus Rapid Transit (BRT) systems in these cities, which will cost approximately R10 billion.

Phase 1A of the Rea VayainJohannesburg is fully operational and carries 40 000 passengers daily. Phase 1B will be operational on 14 October 2013 and the BRT in Pretoria central is scheduled to operational in April 2014.

In Gauteng, R1.7 billion is allocated in bus subsidies so as to keep passenger fares down.