Smart travel: a dialogue between car and highway 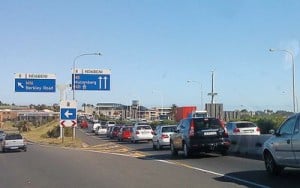 Traffic may become a thing of the past as technology evolves to telling us when and how to drive our cars.

ONE peek at all the electronics under the hood is proof that todayâ€™s car is as much computer as engine. Examine the larger picture, and youâ€™ll see how much the stuff related to cars is becoming smarter, too.

Smart roads, toll plazas, traffic lights and signs are all increasingly connected to cars. Connected cars are talking to one another, and to the devices over and around them. Often the reasons for this will involve cost savings and faster-moving traffic. Travel will be safer, too, advocates say.

“Cars wonâ€™t be by themselves any more, theyâ€™ll be connected to the road and each other,” says Eric-Mark Huitema, a manager in IBMâ€™s “Smarter Cities” initiative. “Eventually there wonâ€™t be many accidents, which means you can reduce the weight of a car by 70%, think of all the metal we put in there to protect people. Cars may be made of glass.”

That is a decade or more away, but already IBM says it has helped reduce traffic by 25% in Stockholm, in part by examining traffic patterns and telling people the best times to drive.

In Singapore, there is a pilot project to override traffic lights when roads detect an accident. At IBM in Copenhagen and Amsterdam, the company monitors bicycle use among employees, giving bonuses to people who forgo cars for bikes.

There does seem to be both money and enthusiasm for more of the same, in the interest of polluting less while managing larger populations.

Navigant Research, which looks at clean technology markets, estimates that spending on smart cities will reach $27.5bn by 2023.

In some ways, the future is already here. According to the consulting firm Oliver Wyman, by next year about 210-million cars on the worldâ€™s roads will be connected wirelessly in some form to the internet and to services like OnStar, General Motorsâ€™ connected-vehicle subsidiary.

The US Federal Communications Commission has since 2003 reserved a segment of radio spectrum for communications among cars, and between cars and the surrounding infrastructure. While the spectrum cannot send information far, it can send exceedingly fast signals, so that high-speed traffic can be followed and adjusted.

“This will be amazing,” says Byungkyu Park, a professor at the University of Virginiaâ€™s Center for Transportation Studies. “Right now the sensors arenâ€™t two-way, and get used for things like toll tags, but soon youâ€™ll be approaching an intersection and the car will know how long a light will be green. If the driver is elderly, it could lengthen how long the light is yellow.”

But the trade-off could well be the independence long associated with driving a nice car.

The number of connected vehicles goes much higher if you count the smartphones people have in their cars. Behaviour can be monitored through driving apps like Automatic from Automatic Labs, which evaluates a personâ€™s safety habits, like braking and acceleration.

Sometimes those apps already share information, in making real-time maps of congestion during rush hour. It is an easy thing to increase the amount of data.

“We live in a world where your car is talking about you,” says Rob Ferguson, director of engineering at Automatic Labs. There is also technology inside cars, like adaptive cruise control and lane-keeping assistance, that if it isnâ€™t online already could be made into two-way feedback systems with sensors in pavement and signs to manage traffic.

The goal is steady flow, which works out better and faster. Digital signs of congestion ahead could compel drivers to slow down, trading autonomy for a faster commute for all.

The movement from individual vehicles to networked systems is already happening with trucks, ships and trains, and may be further ahead. That is partly because the owners are usually not the ones operating them and have more interest in efficiency than operator autonomy.

Research by the University of California, Berkeley, on trucks travelling together found fuel savings of 5%-20% in convoys because the vehicles move at a uniform rate, saving the fuel needed in acceleration, and because of reduced air resistance.

About 40% of accidents happen at intersections, and smarter traffic lights could help manage flow better. Those insights will affect what happens to cars.

“Seatbelts, air bags, anti-lock brakes and stabilisation systems were all mandated for safety,” says Steven Shladover, a researcher at Berkeleyâ€™s advanced transportation technology programme. “Roadsides will tell you the most efficient speed to use.

“Traffic lights will choose whether to keep a yellow light on and let a truck through.”

Because trucks weigh much more than cars, they can tear up pavement with hard braking and slow traffic with their gradual acceleration. Traffic lights may be programmed to let large vehicles through. Pavement for convoy trucks could be hardened, leading to less wear on highways.