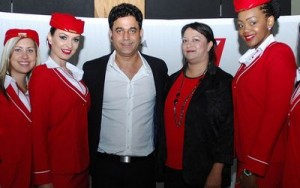 Skywise co-chairman J Malik (centre) and the flight crew at OR Tambo International Airport ahead of the airlineâ€™s first flight to Cape Town on Wednesday. Picture: PUXLEY MAKGATHO

TRAVELLERS in SA will now have more choice when booking flights to Cape Town from Johannesburg, with the launch of new low-cost airline Skywise.

However, the entry of another carrier is not expected to have an immediate effect on ticket prices.

Skywise is the fourth low-cost carrier in the countryâ€™s aviation industry and the second to launch in the past 12 months following FlySafair, which took to the skies in October last year.

The newcomer was headed by the founder of bankrupt airline 1time, but Pak Africa, an aviation investment company, bought the airlineâ€™s air service licence agreement last year with the intention to launch regional flights.

Pak Africa is also in the process of acquiring the brand and the JSE-listed shell company of 1time Airlines, which it has been eyeing for the past five years.

The company intends to purchase aviation-related companies in the region to build up regional operations.

“We will start with flights between Johannesburg and Cape Town, and once settled down nicely, we will fly regionally,” said Skywise co-chairman J Malik. “That is our aim.”

The airline will start flights to Cape Town from Johannesburg on March 16.

Mr Malik said Skywise aimed to bring competition and value for money, which did not necessarily mean “cheap seats”.

According to Comair, air ticket prices have increased 20% over the past three years, but FlySafair said the increase was closer to 40%.

Transport economist and aviation specialist Joachim Vermooten said the benefit of lower oil prices would take time to filter through as airlines were locked in currency and oil hedge contracts. However, further ticket price increases would “take a while”.

More competitors in the market would give consumers more options, he said. “One can only rely on market competitor forces to give a good deal.”

Mango Airlines, the South African Airways subsidiary, and kulula.com were already investing in expanding capacity and were buying new fleets, he said.

Skywise spokesman and head of legal affairs Lesley Ramulifho said the aviation industryâ€™s low-cost market was not congested as only four carriers operated in the domestic market, Mango, kulula.com, FlySafair and now Skywise.

The timing of the Skywise launch was not based on a lower oil price.

“In the aviation industry you canâ€™t position yourself because oil is cheaper, because tomorrow it goes up and then what? So it has been planned for a long time,” said Mr Ramulifho.