Sanral must sort out billing – JZ 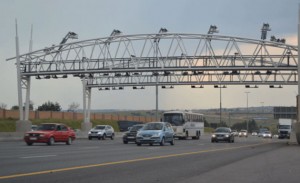 Cars drive under an e-toll gantry on a Gauteng highway. Photo: Lesego Ngobeni/EW

President Jacob Zuma said Sanral needs to sort out its issues with the billing for e-tolls.

In an interview with SABC, Zuma said it was unacceptable that motorists were being billed incorrectly.

There have been numerous complaints from motorists who have been billed, despite living outside of Gauteng, and having never used an e-tolled highway.

“We are often told electronic things don’t commit mistakes. I think it is unacceptable because it is causing an unnecessary problem,” he said in an interview.

“You can’t then bill people wrongly. It is a matter that needs to be fixed, and be fixed very quickly because it undermines an efficient system.”

Zuma revealed that Sanral and the Department of Transport have been spoken to.