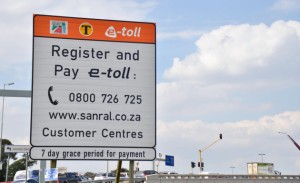 The South African National Roads Agency failed to raise the R600-million it targeted at its bond auction in Pretoria on Wednesday.

Sanral CFO, Inge Mulder, said that the agency had only managed to raise R400m at the bond auction and that the shortfall was due to the continuing uncertainty over the e-tolling project in Gauteng, as well as the recent ratings downgrade from international ratings agency Moody’s.

“Firstly there’s the issue of the certainty or the uncertainty. So, if Sanral is not able to get the certainty and the certainty is not convincingly communicated to the public, it will put additional pressure on Sanral’s toll portfolio,” Mulder explained in an SABC report

“If Sanral is unable to raise the funds – as you know we’ve got a government guarantee – it means that investors can at any time call on that guarantee in which case the government has to pay investors,” Muder added.

The e-tolling project went live in Gauteng towards the end of 2013 but has experienced plenty of opposition from the province’s citizens, who have refused to register and pay for e-tags or the e-tolls.

Gauteng Premier David Makhura last year set up a panel to review the impact of e-tolling in the province and it recommended that the system, in its current form, needed to be reviewed.