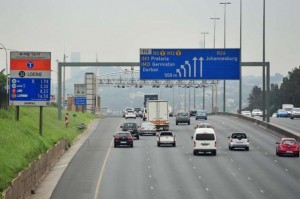 FILE PICTURE: The Loerie e-toll gantry that crosses the N12 toll road and the R24 that is classified a non-toll road and its upkeep is not the responsibility of SANRAL although users will pay a toll fee. Picture: Neil McCartney

â€œTo just put it into context of what is happening, we have 750,000km of roads network,â€ Alli said in Pretoria.

â€œWhat a lot of people donâ€™t always understand is that itâ€™s the 10th largest in the world, which is controlled by the three spheres of government.

â€œYou need to take into accountÂ what the value of that particular asset is to South Africa Incorporated.â€

He was addressing the e-tolls review panel appointed by Gauteng premier David Makhura in July to examine the economic and social impact of the Gauteng Freeway Improvement Project (GFIP) and the e-tolling system to fund it.

An example of how Sanral went about maintaining that asset was through the three current concession routes it operated.

â€œNow the last three years, R9 billionÂ has been invested in the upkeep, of preserving that particular asset of our South Africa Incorporated,â€ he said.

â€œThat concession still belongs to South Africa Incorporated. It does not belong to the concessionaire.â€

At the end of the concession period, which lasted a number of years, the concessionaire was required to return the road in good condition with no charge to the state.

â€œSo weâ€™ve actually increased the value of the state by using an alternative method of funding,â€ Alli said.

The panel was expected to present its findings to Makhura at the end of the month.