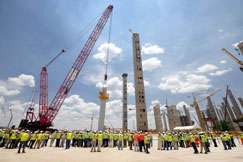 With the current electricity supply problems gripping South Africa, some comfort can be drawn from recent financial data that indicates intensive investment in infrastructure by players in the electricity, gas and water supply industry, Statistics South Africa said on Monday.

The recently published quarterly financial statistics report, which provides a range of financial statistics on industries in the South African economy, shows that capital expenditure in the electricity, gas and water supply industry rose by 91,8% from R13- billion in the second quarter of 2014 (April-June) to R24,3-billion in the third quarter of 2014 (July-September).

Capital expenditure provides an indication of an industryâ€™s investment in long-term physical assets, such as plant, machinery and equipment. A rise in capital spending indicates an intention to increase the scope of operations in the future.

All industries in the economy recorded R108-billion as capital expenditure in the third quarter.

The transport and communication industry contributed the highest amount (R33,5- billion or 31%), followed by the R24,3-billion in the electricity, gas and water supply industry, contributing 23% to the total.