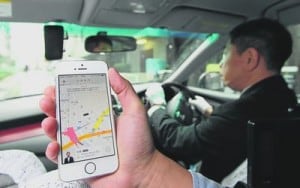 UBERâ€™s primary priority is safety, says the companyâ€™s GM in Cape Town Anthony le Roux. “We work tirelessly to be the safest way for people to get around their cities.

“On requesting a car you see the driverâ€™s photo, name and licence plate, as well as the driverâ€™s star rating, before booking. You are also able to share your route with family so they know when you will arrive due to our live GPS-enabled map.”

Le Roux says “Uberâ€™s technology is streets ahead of our rivals on safety” â€” a statement many might quibble with given the headlines its more unfortunate riders have created around the world.

As well as extensive pre-screening through EMPS, Uber benefits from being an entirely cashless system and riders can rate drivers “honestly and anonymously” at the end of a trip.

“Drivers who donâ€™t consistently keep customers happy and get good ratings from passengers are removed from the Uber service,” Le Roux says.

“Our driver background checks are second to none with all our partners undergoing a comprehensive criminal background check before they are allowed to drive on the Uber system.”

Uber operates in 300 cities in more than 54 countries, and is in Cape Town, Durban, Johannesburg and Pretoria.

SA was the first country outside the US to launch with the service offered in three cities simultaneously. It also operates in Nairobi and Lagos.

While quick to confirm “Uber does not employ any drivers” â€” an assertion many may find somewhat disingenuous â€” the technology company has created 2,000 jobs since launching in SA and “could easily create another 15,000 in two years”.

“Uber has transformed the way people think about their transportation options in SA,” says Le Roux. “We think weâ€™re part of a pretty exciting change. The uptake in SA has been incredible. South Africans love having an alternative choice to move around their cities.

“We want to be the safest and most affordable, reliable ride. EMPS helps us in making Uber that: we have no doubt our relationship with them will draw more riders and drivers.”