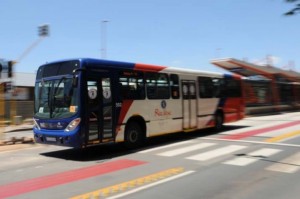 Rea Vaya buses on the Phase 1C network between central Johannesburg, Sandton and Alexandra will in future be powered by natural gas.

Bhiman added that the targeted date for the completion of this section of the cityâ€™s bus rapid transit (BRT) system is February 2017.

Speaking at the NGV 2014 South Africa, a major conference on natural gas vehicles (NGV) held in Sandton this month,Â Bhiman said the move was in line with the city councilâ€™s drive to prioritise green industry development and climate-friendly initiatives as the use of natural gas-powered buses would help improve the cityâ€™s air quality.

â€œWe are also engaging with City parks and the Johannesburg Fresh Produce Market on the possibility of providing us with 1.5 million tons of waste for biogas production,â€ Bhiman said.

He pointed out that it would provide sufficient energy to fuel Rea Vayaâ€™s new NGV fleet.

Bhiman added that Johannesburg would be spending billions of rands over the next three years to replenish its bus fleet.

Executive Mayor Parks Tau early announced that the use of alternative fuels was not limited to public transport fleets, but a decision was made to also convert the city councilâ€™s official transport fleets to natural gas powered.

Last month, city council approved plans to convert its fleet of municipal buses to carbon-free fuel vehicles within the next two years.

City council began conducting the conversion of its Metrobus fleet to run on a mixture of compressed natural gas and diesel at the beginning of this year.

Executive Mayor Parks Tau confirmed the city subscribed to the notion of the reduction of greenhouse gas emissions.