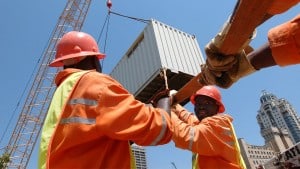 Prioritising spending on â€œeconomicâ€ infrastructure such as roads and transport, electricity, and water and sanitation, the 2015 National Budget has earmarked R274-billion of the public kitty for the construction, maintenance, repair and upgrade of public-sector infrastructure in the coming fiscal year.

Surprisingly, the document also revealed that estimated public spending on infrastructure over the current medium-term expenditure framework (MTEF) period had been revised downwards by R34.2-billion to R813.1-billion.

Finance Minister Nhlanhla Nene, however, noted in his maiden National Budget speech on Wednesday that government would continue to make â€œsubstantialâ€ contributions through the fiscus to infrastructure services over the MTEF period.

â€œWe have all been reminded of the importance of infrastructure investment and maintenance over the past year. It is not just an inconvenience when the lights go out, there is a cost to the economy in production and income and jobs foregone.

SECTOR ALLOCATIONS
State-owned companies (SoCs) were the largest contributors to public sector infrastructure expenditure, and were projected to spend R362.2-billion over the next three years.

Spending by provinces was forecast at R140.1-billion over the same period, while municipalities were forecast to spend R177-billion.

The economic services sector accounted for 82.2% of the total public sector infrastructure budget and would contribute to the expansion of power generation capacity, the upgrade and expansion of the transport network, and improvements to sanitation and water provision.

Transport and logistics infrastructure spend in 2015/16 had, meanwhile, been revised downwards from the estimates published in the 2014 Budget Review to R104.3-billion for the year.

â€œEskom has reduced its capital budget as many of the projects in its build programme are nearing completion, whileTransnet has curtailed its capital expenditure programme on the expectation of reduced demand for its services and in light of the subdued medium-term economic forecast,â€ read the 2015 Budget Review document.

The countryâ€™s energy infrastructure subsector had been allocated R166.3-billion over the next three years, accounting for about 20% of the totalÂ  public sector infrastructure budget.

Spending by social services, education and health accounted for 13.1%, 5.4% and 3.6% of the total infrastructure budget respectively.

ENERGY INFRASTRUCTURE
Elaborating on public sector energy projects, the budget document reiterated that the first units of Eskomâ€™s developing Medupi and Kusile coal-fired power stations were scheduled to become commercially operational in the second half of 2015 and 2016 respectively.

Construction at Medupi was delayed again last year as a result of industrial action, while the operational date of Kusileâ€™s first unit was also delayed following the detection of boiler-tube welding defects.

The first unit of the Ingula pumped storage scheme was due to become operational later this year.

The funds would also go towards building 12 substations, upgrading 18 others and building 330 km of medium-voltagepower lines, while upgrading a further 285 km of power lines.

Moreover, National Treasury reported that the Renewable Energy Independent Power Producer Procurement Programme, which was launched in August 2011, had, by December, contracted 66 projects to provide more than 4 100 MW of renewable energy generating capacity to the grid.

â€œAs a result, generating capacity of 1 522 MW, sufficient to power 670 000 average South African households for a year, had been brought online by December.

â€œAn additional 13 projects will be procured in the latest bid-submission period to increase total renewable energygenerating capacity to about 5 200 MW. The cumulative investment for all 79 projects is estimated at R169-billion, of which about 28%, or R47-billion, is foreign direct investment,â€ stated the budget review document.

In addition, the request for proposals to procure 2 500 MW of coal-fired power generation and 800 MW of cogenerationprojects was issued in December for submission in June.

The Gas Utilisation Master Plan â€“ a draft document intended to design the procurement process of gas and outline its role in South Africa in future â€“ was also finalised and released for public comment last year.

TRANSPORT INFRASTRUCTURE
Over the MTEF period, Treasury noted that government and SoCs had budgeted R339.2-billion for transport andlogistics infrastructure, accounting for 42% of the total public sector infrastructure budget over the period.

These investments were aimed at improving the national transport infrastructure network, enhancing the mobility of people and services and facilitating regional trade.

â€œRevenues from services provided by SoCs will help fund infrastructure investment, complemented by national and provincial allocations for road construction and maintenance,â€ it held.

Transnet, meanwhile, continued to expand its freight rail network and upgrade capacity on the iron-ore and coal export lines by modernising the rolling stock and refurbishing existing infrastructure.

Planned investments in major capital projects â€“ including the purchase of rolling stock for freight locomotives and the expansion of the manganese rail and terminal, the iron-ore line and the coal line â€“ would total over R50-billion over the next three years.

In addition, the diesel service of the new multiproduct pipeline was now operational and the pipeline would begin to operate at its full multiproduct capacity once construction of the coastal and inland terminals was complete.

â€œConstruction of these terminals is under way and, once completed, the trunkline will enable delivery of products through the pipeline,â€ Treasury advised.

Over the MTEF period and beyond, major investments in roads, rail and ports would include transfers to the South African National Roads Agency of R39.1-billion over the medium term to fund maintenance and improvement of the national nontoll and coal-haulage road network and R1.1-billion to upgrade the critical Moloto road.

Over the medium term, R59.2-billion was allocated to provincial human settlements departments for low-income subsidyhousing programmes, and R33.7-billion to metropolitan municipalities for bulk infrastructure, land and basic services, particularly to upgrade informal settlements.

Meanwhile, over the medium term, R16.6-billion had been allocated through conditional grants to national and provincial departments for the construction, upgrade and maintenance of healthcare facilities.

â€œThe Department of Basic Education will replace ageing, unsafe and other inappropriate infrastructure, and providewater, sanitation and electricity to schools across South Africa over the medium term.

â€œFunding of R7.4-billion has been allocated for this purpose over the medium term through the school infrastructurebacklogs conditional grant,â€ Treasury stated.

An additional R3.2-billion would be provided to the Department of Higher Education and Training over the MTEF period to continue construction that had already begun at two new universities â€“ the University of Mpumalanga and Sol Plaatje University in the Northern Cape.

Other infrastructure projects for new buildings and equipment, and refurbishments and upgrades to existing facilities at tertiary institutions, would amount to R7.4-billion over the three years.

MUNICIPAL AMENDMENTS
Nene told Parliament on Wednesday that amendments to the Municipal Fiscal Powers and Functions Act would shortly be proposed in a bid to clarify the rules surrounding bulk infrastructure charges and ensure an equitable and transparentsystem of contributions by land developers.

He added that Treasury had recently met the mayors and city managers of all eight metropolitan municipalities to discuss how to accelerate investment, improve infrastructure maintenance and strengthen financial management.

â€œMetropolitan councils will announce details of their investment programmes in their forthcoming budget statements.