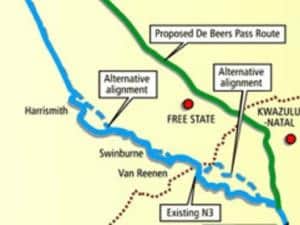 The proposed expressway would result in higher levels of safety, comfort and productivity for road users.

Sanral communications GM Vusi Mona noted in a statement that the expressway would result in higher levels of safety, comfort and productivity for road users.

The De Beers Expressway section of the N3 would be a 99 km dual carriageway, which would link Keeversfontein, in KwaZulu-Natal, with Warden, in the Free State.

Although the route was part of the N3 Toll Concession, it would not be tolled between Cedra and Heidelburg, and there would be no change to current toll tariffs on the road.

The route would be 15 km shorter than the N3 and would have flatter grades, a smoother alignment and fewer sharp curves. This would result in a 30-minute time saving for light vehicles and a 60-minute saving for heavy vehicles, as well as better levels of service and a reduction in accidents.

The route would reduce the effects of N3 road closures by at least 80% and remove bottlenecks at Van Reenenâ€™s Pass.

Mona explained that the existing Van Reenenâ€™s Pass route, which was built in 1961, was no longer able to effectively handle the growth in traffic volumes. Increase in Accidents The number of accidents on the route had increased in recent years, resulting in many fatalities and road users being inconvenienced through sporadic road closures.

â€œThe existing stretch of the R103/N3 past Harrismith and across Van Reenenâ€™s Pass will remain in place and continue to be maintained by Sanral. â€œOnce the construction of the De Beers Expressway has been completed, there will be two highways crossing the Berg, providing all road users with an alternative route between Keeversfontein and Warden,â€ said Mona.

He added that, while businesses on the current route would be affected, not all existing traffic would shift to the new route.

Sanral expected one-third of the through traffic to remain on the current route.

Further, Mona stated that Harrismith would become a â€œboom townâ€ during the expected four-year construction period.

The N3 route had been earmarked as one of the priorities of the multibillion-rand Strategic Integrated Project 2 that was crucial to unblocking economic development and providing much-needed capacity along key freight corridors inSouth Africa.

Important ComponentConstruction of the De Beers Expressway route formed an important component of plans to develop the Durbanâ€“Free Stateâ€“Gauteng logistics and industrial corridor, which was vital to the future of the national and regional economies.