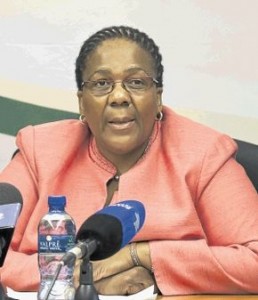 Transport Minister Dipuo Peters is expected to travel to Lesotho to resolve problems between taxi operators of the two countries, the transport department said on Wednesday.

She would meet Kingdom of Lesotho transport minister Lebesa Maloi on Thursday in Maseru, said spokesman Jomo Khasu in a statement.

“Conflict between South African and Lesotho taxi operators have been raging on for some time.”

Khasu said an unsuccessful joint discussion had been held by transport agencies of both countries.

“It has become clear that there is a need for high-level intervention for both countries to find an amicable solution.”

Earlier this month the department received a report about an illegal closure of the border, preventing transportation of people.

Efforts were made to resolve the matter but all failed.

“It is in this context that the high level meeting between the two ministers will take place.”

Khasu said the minister would also secure a bilateral relations agreement between the two neighbouring countries.