Over 700 Vehicles Impounded in Mpumalanga 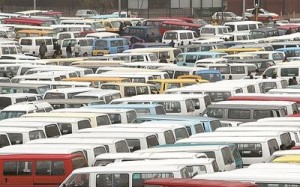 Mbombela â€” More than 700 illegal taxis and buses were impounded while travelling through Mpumalanga over the Easter weekend.

Public Works, Roads and Transport spokesperson, David Nkambule, said on Tuesday that the department was out in full force to ensure that all public transport operators abide by the rules of the road.

“Since the start of the Easter weekend, 713 public transport vehicles including taxis, metered taxis and buses were impounded for operating for rewards without operating licences, which is in contravention of the Transport Act,” said Nkambule. He said the vehicles would only be released once a fine of between R2 000 and R2 500 was paid, depending on the offence committed.

Nkambule urged all public transport operators to abide by the law.

He said temporary operating licences are available for those undertaking special trips to ferry passengers on routes that are outside their operating licenses.

The licences are available from any of the department’s Operating Licence Board Offices.