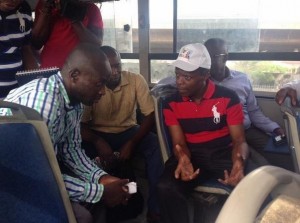 The vice presidential candidate of the All Progressives Congress (APC) in the 2015 presidential election, Prof. Yemi Osinbajo, on December 25, 2014, took his campaign to a commercial bus.

Osinbajo joined passengers in the Bus Rapid Transit, BRT, from the Tafawa Balewa Square to Barracks area of Lagos, urging the passengers and other Nigerians to vote for Muhammadu Buhari.

According to him, the country is in need of a man like Buhari, APCâ€™s flag bearer, to end corruption, Punch reports.

Addressing the passengers on the bus, the APC Vice presidential candidate said: â€œEvery Nigerian knows that Maj. Gen. Buhari is a no-nonsense person. He is going to make changes that would turn Nigeria around for the better. Remember that the APC is the party of change. Collect your PVC and ensure that you vote for the APC.

â€œThe only way to make an omelet is to break an egg. You have to do something and I think that all of us, whatever it is that we are involved in must be interested in making a difference in this country. This country needs help desperately. Considering the economy and the security challenges, everyone of us must be involved in trying to get a change.â€

Speaking on whether Buhari was sponsoring Boko Haram, Osinabjo described the allegations as â€œpure propaganda,â€ saying if the former head of state was one of their sponsors, they would not have attempted to kill him.

He gave account of his stewardship as a former Attorney General of Lagos State saying the Lagos State judiciary recorded huge success because he enforced a zero tolerance policy for corruption.

He added that he would make use of â€œunusual opportunities to reach out to Nigerians on the need to vote out the PDP.â€

When Osinbajo arrived at Barracks area of Lagos, he attracted some APC supporters, causing a mild gridlock on the road. Party supporters, who chanted solidarity songs, struggled to take photographs with him.

Osinbajo also visited the Lekki Palms where heÂ made a short speech, wishing everyone a Merry Christmas and went around the mall, shaking hands with people, signing autographs and taking selfies.

Osinbajo had some days back met with some young people, volunteers, and social media influencers in Lagos to discuss matters affecting the country.

Muhammadu Buhari is the presidential candidate of the APC in the forthcoming 2015 elections and he will be competing against President Jonathan and other candidates from other parties.

He chose Prof Yemi Osinbajo, a pastor of the Redeemed Christian Church of God (RCCG), as his running mate. This decision has triggered a lot of reactions.