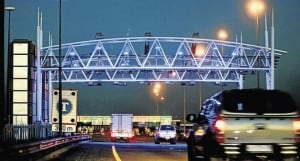 Brad Cibane says we should all be more honest about our motivations with regards to e-tolls.

Those of us who oppose e-tolling are neither driven by empathy for the poor nor by a demand for good governance. We just hate paying for stuff.

The e-tolls came at a significant cost for the ANC. Its support in Gauteng dropped by more than 10 percentage points in the May 2014 elections – from 64% to 53%. It therefore came as no surprise when on Wednesday Deputy President Cyril Ramaphosa announced a new e-toll regime. The new regime is, essentially, a compromise between the Gauteng provincial government (ANC) and the middle-class in Johannesburg.

As can be expected, those whoâ€™ve discovered the bright spotlight of e-toll opposition are still out for blood. They are descending to the truly outlandish to support their decoy claim that e-tolls are oppressive and anti-poor. Former union leader Zwelinzima Vavi, for example, reiterated his call for civil disobedience. He called tolling â€œeconomic apartheidâ€. The Economic Freedom Fighters, not known to miss a beat, claimed that tolling â€œis the same as producing a dompas to move from one place to the other.â€

The purpose of this lengthy column is to drum some details into what is becoming an inane and tedious debate. As a member of the middle-class, I am inclined to agree with Mr Vavi and the fighters. In fact, I would be so brave as to say that we should extend our civil disobedience to all â€œuser payâ€ utilities. Why stop at e-tolls when we can refuse to pay for water and electricity too? Why stop there? If you ask me, taxes are even more oppressive. Mr Julius Malema would agree!

However, I think we should all be more honest about our motivations. As I will show below, we are neither driven by empathy for the poor nor by a demand for good governance. We just hate paying for stuff.

A brief history of e-tolls

In 1996 a Government White Paper recognised that the transport system is inadequate and needs to be improved in an accelerated manner. The paper proposed two approaches. First, that appropriations by Parliament must be used to improve the road infrastructure in rural communities that cannot afford a â€œuser payâ€ approach. Second, that a â€œuser payâ€ principle must be used where economically feasible – such as in middle to high-income urban communities.

In September 2006 a joint report of the Department of Transport, Sanral and the Gauteng provincial government, noting incessant public complaints about traffic congestion in Johannesburg, recommended an extensive upgrade of roads as part of the Gauteng freeway improvement project (GFIP).

In 2007 the Cabinet approved an upgrade of the N1, section 20 (from Armadale to Midrand). The upgrade, according to one report, is expected to return to society a positive net present value of R210 billion over the next 20 years.

An act of Parliament tasks Sanral with the construction and upkeep of national roads. Section 34 of the Act prescribes twelve funding options – including loans granted to or raised by Sanral, levies charged on the sale of fuel, toll and monies appropriated by Parliament. Sanral generally funds the initial capital outlay for large projects through open market bond issues.

In line with the 1996 White Paper, the government took a policy decision to adopt a â€œuser payâ€ approach of electronic toll collection (e-tolling). It is worth noting that, as of 2014, 19% of South Africa’s national roads are toll (or user-pay) roads.

In October 2007 Sanral published its intent to have the road declared a toll road. It detailed in its proposal to the Cabinet that the system was both complex and expensive. However, it was necessary to ensure toll collection without boom gates to impede traffic flow.

In January 2008 Sanral approached the Minister of Transport for authorisation to have the N1, Section 20, formally declared a toll road in terms of Section 27 of the Act. The Minister gazetted his approval on 28 March 2008. The notice inviting the public to comment on the proposal was also published in six newspapers circulating in Gauteng.

The first phase of the GFIP â€“ which included roads, ramps, bridges and fly-overs â€“ began in May 2008 through to 2011. Sanral incurred a staggering R21 billion in debt, mostly in bonds, to finance just the first phase. The Treasury guaranteed a total of R19 billion. In the event of default, Sanral will be liable for the full and punctual repayment of third party loans.

In 2011 the Department of Transport published toll tariffs, which led to a massive outcry. The minister suspended the implementation of e-tolls and constituted a steering committee to deal with public concerns. The steering committee held public hearings and, ultimately, recommended new tariffs and a monthly cap for users. Further, in 2012 the minister announced a parliamentary appropriation of R5.8 billion to facilitate a reduction in toll tariffs.

A group of civic organisations took the government to court over complaints that costs of collecting e-tolls are unreasonably high and irrational. The meat of the complaint was that â€œ[o]ver a 20-year period the public would be required to pay no less than R21,5688 billion for the operation of the open road toll system. Since the total capital cost of phase one of the GFIP was R20.5 billion, this means that road users will be required to pay more for the collection of e-tolls than for the upgrading of the roads.â€ In essence, their contention was that collection of tolls over a 20-year period would exceed the cost of capital.

The group argued in court that government should have opted rather for a ring-fenced fuel levy. It preferred the levy because it poses no collection costs and would use existing infrastructure. The courts (High Court, Supreme Court and Constitutional Court) dismissed the successive challenges mainly on the basis of separation of powers – policymaking is the prerogative of the executive.

When the claim of unreasonableness failed, the parties fell back on a laundry list of weak legal arguments – including that the process was procedurally unfair and that tolling amounts to an arbitrary deprivation of property (money) – all of which were rebuffed by the courts.

An independent study conducted by three entities – Wits Business School, Arup and Strategic Economic Solutions – (published in 2010) undertook a cost-benefit analysis, as well as micro- and macro-economic analyses of tolling. The study identified a fuel levy as the most efficient funding method, followed by funding from the National Treasury. Tolling was identified as the least cost-effective method. The reason is that â€œtolling reduces user benefits by the cost of the tolling infrastructureâ€.

However, the study also acknowledged that the government was facing a choice efficiency and equity.

As regards the fuel levy: while it is the most efficient method, it is also the least equitable. An increase in the cost of fuel causes inflation of consumer goods (e.g. cost of staple foods). The consequence is that poor people, although not paying directly for fuel, are burdened by costs of roads they do not use.

As regards Treasury funding: the study noted that the â€œreality of extensive poverty and hardship in the country, as well as the need to address these issues, have resulted in historic budgetary allocations in favour of poverty alleviation (rightly so) and at the â€˜expenseâ€™ of other areas of expenditureâ€. Essentially government would need to divert funds from poverty alleviation in order to cover the financial burden of direct funding. The study also found that Treasury funding carries risks – including a potential tax increases, reduction in sovereign credit ratings, which would hike sovereigns cost of borrowing.

In the end, while tolling may be the least efficient method, it also aligned with the governmentâ€™s objectives of reducing inflation and alleviating poverty.

To those like me who want free roads, free water and free electricity, let us be honest, we could not be bothered about the poor. We just want free stuff.