No agreement reached with taxi operators 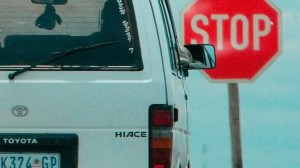 No agreement has been reached between government and Mamelodi taxi operators regarding the release of more than 50 impounded taxis.

â€œWe can confirm that there is no agreement that has been reached between the two parties being government and the taxi association for us to release the vehicles for them to resume operations,â€ said Department of Community Safety spokesperson Thapelo Moiloa.

â€œNeither the Department of Community Safety or Department of Roads and Transport in Gauteng has entered into such agreements. We distance ourselves from these talks that we have struck a deal.â€

The statement follows the announcement by taxi operators that they would be returning to work and after their protest over the impounded taxis.

Stemer Monageng from the Mamelodi Local and Long Distance Taxi Association claimed that government was wrong to impound their taxis and an agreement was reached to rectify that.

He said the decision was reached following a meeting with stakeholders where they showed documents proving that their vehicles were legitimate and should not have been impounded.

Monageng added that they would be collecting their cars on Friday morning effectively ending their strike.

On Wednesday, police impounded more than 50 taxis and other vehicles in the area in a bid to stop violence against a new bus operator.

Commuters in Mamelodi were left stranded on Thursday morning as taxi drivers went on strike in protest against the police action.

Taxi operators became violent last week when buses operated by Autopax were introduced to replace Putco’s service. Five people were injured when a Putco bus was shot at. Buses were also pelted with stones.

Moiloa said law enforcement agencies would be deployed to the area to deal with any issues that may arise. He said the impounded cars would only be released once a fine had been paid. Moiloa added that many of the taxis had un-roadworthy certificates with some drivers not having drivers licences.

â€œLaw enforcement is not negotiable. If we come across such a vehicle, we will take it off the road,â€ he said.

A meeting has been scheduled for Friday between the taxi operators and Gauteng Premier David Makhura to bring an end to the problems associated with public transport in the township.