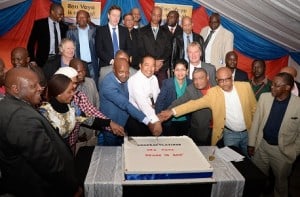 Through the 12-year agreement, the taxi operators and Putco have become shareholders of Ditsamaiso, a joint venture that will from August 1 operate the Rea Vaya Bus Rapid Transit (BRT) system along the Phase 1B routes.

The signing was presided over by Member of the Mayoral Committee (MMC) for Transport Councillor Christine Walters, who praised all parties for their commitment to improving public transport in the City.Â MMC Walters said the agreement was a milestone in the Cityâ€™s drive to provide world-class public transport service.

â€œThis is a major milestone in the transformation of public transport in the City. I canâ€™t even imagine the work you [the taxi operators and Putco] have done [since the BRT project was first mooted].Â You were pioneers in this painful process of transformation. We didnâ€™t always agree but today I am honoured and humbled by the progress we have made,â€ she said.

The MMC said the agreement would be implemented from August 1 to give the board of the new company time to ensure a smooth transition. The new joint venture company will operate Rea Vaya services along Phase 1B routes, including the trunk route from Thokoza Park to Parktown, as well as feeder and complementary services to and from Cresta, Flora Centre, Yeoville, Pimville, Dobsonville and Mapetla.

Consultations for the creation of the Bus Operating Company (BOC) started in 2010 with 365 taxi operators, Putco and Metrobus. When agreement was not reached by the end of 2013, an interim BOCA was signed and an interim BOC set up.Â The interim BOC signed an agreement with Piotrans, which has been managing Rea Vaya operations since then.

MMC for Economic Development Councillor Ruby Mathang said the agreement was another major move in the Cityâ€™s quest to roll out improved public transport in the city.

â€œWe are reaching out to all parts of the city. We intend to extend reliable public transport and no part of the city will be left untouched by this transformation. For the city to thrive it has to provide efficient public transport, otherwise it is doomed,â€ MMC Mathang said.

The agreement means that the taxi operators and Putco will cease to operate their services along the specified trunk, feeder and complementary routes â€“ making Rea Vaya the sole public transport provider. Peter Mabe, a representative of the taxi associations, thanked the City for involving them in the project.

â€œChange is painful, especially if you donâ€™t understand it. But with this partnership, our industry has benefited a lot. My appeal to the new company is make sure this business does not fail.â€

â€œWe were working in silos but now we are learning and growing in the transport sector. Taxis are now part of the mainstream of public transport. Owners and drivers have been empowered in the process,â€ he said.