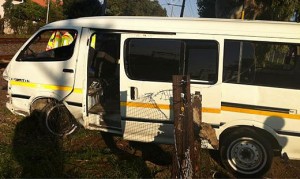 CAPE TOWN – A national plan has been launched in the Western Cape to make scholar transport safer.

The devices, similar to black boxes found in aircrafts, will monitor driving habits and performance.

The recorded data will automatically be sent to the drivers, Child Safe and the department.

The organisation says the leading cause of death among people between ages one and 18 is road crashes.

Child Safe is hoping the initiative, which will be trialled at Norma Road Primary School in Athlone, will save the lives.

In 2010, at least 11 schoolchildren were killed when a train crashed into their minibus taxi at the Buttskop Level Crossing in Blackheath.

Taxi driverÂ Jacob HumphreysÂ had overtaken a queue of cars waiting to cross the level crossing and ignored warning signals.

He was later convicted of 10 counts of murder and four of attempted murder.