New Rea Vaya route will be built at night 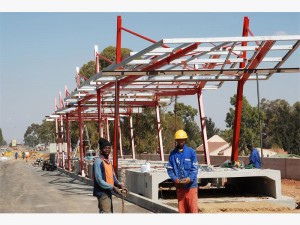 TAKING SHAPE. Construction of new Bus Rapid Transit routes will start this month during the night to not disrupt traffic.
Picture: Morapedi Mashashe.

Most of the Phase 1C construction of the Rea Vaya BRT lanes would be undertaken at night to limit traffic congestion in the east of Johannesburg.

The City of Joburg said overnight construction was set to begin at the end of the month from 8pm to 5am to allow normal road operations during the day.

â€œMotorists are advised to exercise caution when driving along the construction site. Road narrowing signages will be in place and a speed limit of 40km per hour would apply. Flag people will assist with directing traffic during the course of the day,â€ the municipality said.

Its transport department and the Joburg Development Agency (JDA) will be constructing 16km of dedicated Rea Vaya BRT lanes joining the inner city, Alexandra and the Sandton CBD over the next two years.

The project had been divided into two sub-phases, including the road pavement structure (two middle lanes of the existing road) to be constructed to BRT standards. This will be completed in November.

From November to October next year, the road pavement structure of the outside lanes (to be used by private traffic) will be rehabilitated, followed by the construction of the non-motorised transport infrastructure for pedestrians and cyclists.

â€œWe supported the project from the start, as we believe it will be one of the best things to happen in the area,â€ said Chadwick.

â€œThe project will hopefully encourage property owners to upgrade their establishments, as the roads would be improved. Ultimately, it boiled down to the need of a decent public transportation system from our area to the CBD. It will make a big difference in the lives of many in the area,â€ he said.

The project forms part of the municipalityâ€™s R2 billion Corridors of Freedom initiative to â€œre-stitchâ€ the city.

A number of routes and nodes had been identified to link people in the city with places of employment. This included routes from Soweto to the Johannesburg CBD along Perth Road and Empire Road; the CBD to Alexandra; Alexandra to Sandton; and the Turffontein node.

The corridors will aim to link mixed-use development nodes in the city with high-density accommodation, supported by office buildings, retail developments and opportunities for education, leisure and recreation.

One of the key aspects of the corridors had been to improve public transport, walking and cycling in the city.

The municipality embarked on a consultation process with various stakeholders, including businesses and residents, in September last year.

â€œComments and concerns obtained during the consultation process influenced the final designs of the route,â€ said the municipality.

The project is scheduled for completion by December 2016.