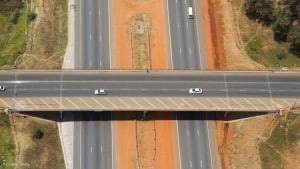 Special purpose vehicle Bakwena Platinum Corridor Concessionaire has announced plans to inject over R5-billion into the rehabilitation and upgrade of the N1N4 toll road over the next 15 years as it reaches the midway mark of its 30-year concession with the South African National Roads Agency Limited (Sanral).

Tasked by Sanral in 2001 to manage, maintain and upgrade the 385 km route, Bakwena had started its â€œsecond interventionâ€ of upgrades since building the national route between 2001 and 2004 at an initial cost of R5.33-billion in 2015 rand terms, CEO Graeme Blewitt said on Tuesday.

Bakwena, which was responsible for the upkeep and toll collection, besides others, of a 90 km stretch on the N1 from Pretoria to Bela Belaand the 285 km N4 route from Pretoria through to the Botswana border, would complete the current R3.68-billion upgrade and rehabilitation programme during 2018/19.

Traffic on the routes steadily climbed by around 3% a year, necessitating corrective action and enhancements to the extensive infrastructure, said Bakwena commercial manager Liam Clarke.

The number of vehicles driving along the N1 or N4 routes was constantly monitored for any trends through the use of traffic counting stations placed along the route to enable the company to effectively plan upgrades and rehabilitation programmes or expansions when required.

The Zambezi and Doornpoort Plazas were the busiest, with Doornpoort boasting the passage of around 35 000 vehicles a day, while the vehicles travelling through the Zambezi Plaza fluctuated from 20 000 to 40 000 a day, Clarke commented during a media tour of the tolled route this week.

As many as 170 000 vehicles passed daily through the 17 Bakwena-managed toll plazas on the N1N4 route.

Following on the momentum gained in 2014, Bakwena would, this year, spend R110-million on improvements and upgrades on the N1 and R149-million on the N4, with the continuation of rehabilitation work on 20 km of the N4 from Zeerust to Groot Marico, the start of resealing the N4 from Helen Joseph to the Marikana interchange and from the Brits interchange to Soshanguve.

There were also plans to add an additional carriageway between Bapong and Marikana and rehabilitate the road between Rustenburg and Swartruggens on the N4.

Additional work extended into this year included the upgrade of Sefako Makgatho Drive, in Zambezi, into a diverging diamond interchange on the N1 to relieve the capacity constraints at the interchange terminals.

The Doornpoort Plaza would also see improvements as Bakwena progresses construction of four reversible lanes. This would allow for 28% more capacity on the N4 route upon completion at the end of May.

Bakwena said it would also complete the R275-million rehabilitation of the N1 section from Pienaarsrivier to the Bela Bela interchange by June.

In December 2014, the group completed the R130-million upgrade of the N1 between the Zambezi interchange to thePumulani Plaza, with a third lane added and the Zambezi Bridge widened to accommodate the three lanes in both directions.

An additional 32 km of the N4 route between Tshwane and Rustenburg was also widened into a dual carriageway.

The building of a second carriageway with bridges on the N4 between the Brits West Interchange (R512) and the Buffelspoort Interchange was completed in November at a cost of around R380-million, while the R200-million rehabilitation of the road between Swartruggens and Rustenburg on the N4 was completed by December 2014.

Bakwena would also embark on its â€œfinal interventionâ€ of rehabilitation shortly before it was required to hand over the asset back to Sanral in 2031.

At the end of 2029/30, Bakwena would inject R1.7-billion to rehabilitate its routes to ensure that the roads were in a â€œcertain conditionâ€ as stipulated by the concession, Blewitt said.