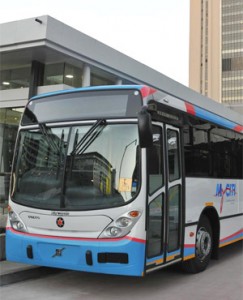 The MyCiTi bus network has been lauded as a leader in the field of African public transport systems.

Cape Times – The MyCiTi bus network has been lauded as a leader in the field of African public transport systems.

That accolade came from the Siemens African Green City Index â€“ an independent survey that rated as â€œabove averageâ€ the City of Cape Townâ€™s performances of its responsibilities in land use practices, waste management (including reducing, re-using and recycling waste), environmental governance, air quality and water.

â€œThe City of Cape Town welcomes the findings of an independent survey which has recognised the cityâ€™s MyCiTi bus network as a leader in the field of African public transport systems,â€ said Mayco member for transport Brett Heron.

â€œAs a result, Cape Town is among the top cities in the index for the length of superior forms of transport such as Metro or BRT lines. The continued expansion of this network is crucial to both the empowerment of previously disadvantaged communities and to ease the pressures brought by rapid urban development.â€

The report says of the MyCiti system: â€œThe cityâ€™s performance in this category is bolstered by policies aimed at encouraging commuters to take greener forms of transport and by the existence of dedicated mass transport lanes.â€

The report lauds the cityâ€™s measures to contain urban sprawl and the balance that it is seeking between necessary urban development and sustainability best practice, said Herron.

â€œOver the years, the city has invested more than R250 million in 68 public spaces in an effort to create innovative and inclusive community-friendly areas. The cityâ€™s previously disadvantaged communities have been the recipients of the majority of this investment,â€ Herron said.

â€œMore than R35 million has been earmarked for the public urban space programme in the next two years. This will include the commencement of projects such as the upgrades to the Pavilion Precinct in Strand, the Pampoenkraal heritage site in Durbanville and the Langa Station southern forecourt.â€