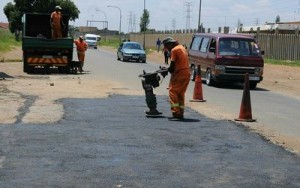 GAUTENG finance MEC Barbara Creecy said on Wednesday that the provincial government and municipalities needed to consider alternative means of funding infrastructure in the face of tight fiscal provisions and economic difficulties.

The Gauteng government also has to do more with less, as Finance Minister Nhlanhla Nene is pushing for fiscal discipline on the part of the government and the Treasury.

The Gauteng government will be spending more than R94bn on social and economic infrastructure projects over the next three years.

Ms Creecy, speaking at the FMDV (Global Fund for Cities Development) Conference in Sandton, Johannesburg, said infrastructure development was cited by the National Development Plan (NDP) as essential for the inclusive growth of economies and for helping citizens to improve their lives.

“By investing in social and economic infrastructure, including quality public transport; re-engineering the provinceâ€™s spatial framework in new human settlements; mainstreaming township economies; and providing quality health care and education, we intend to put our global city region on a new trajectory of integrated development and social and economic inclusion,” Ms Creecy said.

Redirecting scarce government resources to economic and social infrastructure was more urgent than ever to “improve productive capacity and create economic linkages for citizens”, she said.

Johannesburg executive mayor Parks Tau said that the metroâ€™s issuance of seven bonds valued at R5.79bn on finance markets was a useful mechanism to raise capital for infrastructure development in the city.

“We thought it would be appropriate to start the bond initiative to fund our infrastructure needs â€¦ Through the issuance of our first bond in 2004 we broke through and used the debt capital markets to generate capital. The second bond in 2005 increased tenure and reduced cost. We needed to explore an underwriting mechanism for our second bond CoJ 02. Itâ€™s safe to say we (were) successful,” Mr Tau said.

He said the city faced the challenge of generating an appetite from the local bond market for municipal bonds.

He said local authorities in these countries established finance agencies to manage their bonds and their issuance. However, he said, their stability depended largely on the financial standing of the local authority, which the finance market tool was meant to serve.

“The agency must supervise a cityâ€™s credit-worthiness. There must be a separation between the roles of politicians and professionals. The role of politicians is to decide overall structure but professionals must handle financing,” Mr Andersson said.