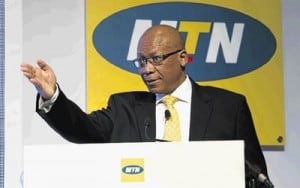 MTN will invest close to R30bn this year to grow its infrastructure in the 23 countries where it operates, in an effort to attract 17.5-million more customers.

The bulk of the expenditure has been set aside for SA, where it has suffered declining revenue, and Nigeria.

The board had authorised investment spending of R10bn on South African cellphone and fibre-optic networks, said CE Sifiso Dabengwa on Wednesday. That is nearly double the R5.7bn spent upgrading the network last year. The year before it spent R5.8bn.

In Nigeria, MTNâ€™s biggest market by both revenue and customers, it is spending R8.8bn on infrastructure this year. Last year it spent R8.4bn, almost half the previous yearâ€™s R14.3bn.

That is despite a temporary ban on the sales of SIM cards by the regulator early last year, which was done to force cellphone operators to improve the quality of their networks.

Asked whether the company was playing catch-up on its capital expenditure â€” having fallen behind Vodacom, its main competitor in SA â€” Mr Dabengwa said it was preparing to attract more users. It would target 2.4-million more subscribers in SA. “We have sufficient headroom on the network in Nigeria. Our capacity is much more than the traffic coming onto our network,” he said. “As far as the Nigerian regulatory issues are concerned â€¦ weâ€™ve resolved them.”

MTN hopes to add 4.8-million new users in Nigeria this year. Its 59.9-million Nigerian customers spent R54bn, up 12% from the previous year. MTNâ€™s other large markets, Ghana and Cameroon, will get R5.3bn of the capital spending.

The companyâ€™s revenue in SA fell 3.9% against stiff competition from Vodacom and smaller rivals Cell C and Telkom Mobile.

MTN possibly lost market share in the data wars, said Maqhawe Dlamini, a portfolio manager at Mvunonala Asset Management. “My sense is that data is definitely their target now,” he said, adding that MTN was trying to catch up with Vodacomâ€™s investments in data-enabling technology.

It also has to deal with challenges in some hot spots. MTN said it was still unable to repatriate about $1bn trapped in Iranian subsidiary IranCell due to sanctions against Tehran.

In northern Nigeria, where Islamic militant group Boko Haram has seized large areas, MTN is treading carefully and protecting its staff. “Our problems are limited to three states, which contribute only about 5% of our Nigerian revenue,” said MTN Nigeria CEO Michael Ikpoki. He said about 120 sites were in areas controlled by Boko Haram. “Itâ€™s really small in terms of our operations.”

In war-torn Syria, MTN has just converted its licence to a “build, operate, own” model.