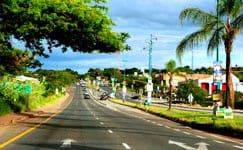 Mpumalanga has set aside R2.065-billion for its infrastructure development programme for 2015/16.”Our infrastructure development programme continues to prioritise socio-economic infrastructure such as roads, hospitals and schools,” Premier David Mabuza said in his the State of the Province Address on 27 February.He said the province was making progress in the rehabilitation and maintenance of the coal haulage network to mitigate the degradation of roads in its mining areas.”The construction of the 68km Majuba railway is progressing well and the completion of this project will alleviate pressure on our coal haulage network, as it will change the transportation mode of coal to a number of power stations, especially Majuba Power Station, from road to rail.”The first coal-loaded train is scheduled to begin operating on 31 May 2016. “Once completed, this corridor will have cost in the region of R5.2-billion.”

In the provincial capital, Mbombela, phase one of the implementation of the Integrated Public Transport Network had been completed. Construction of the infrastructure, which involves widening some parts of the central business district road network, was under way. The project was aimed at incorporating all modes of transport.Further, Mabuza said the Moloto rail corridor development programme had been approved. “The Moloto Development Corridor will be a catalyst for stimulating economic growth and job creation that will benefit the province, especially Thembisile Hani and Dr JS Moroka local municipalities.”It will attract private sector investment along the corridor, thereby increasing prospects for employment and local enterprise development,” he said.The national Department of Transport had signed and handed over the project to the Passenger Rail Agency of South Africa for implementation.

Mpumalanga was making a significant contribution to enterprise development and supporting businesses to create employment opportunities, he said. The province and the Department of Trade and Industry had prioritised the establishment of the special economic zone (SEZ) in Nkomazi to attract investment that would unlock growth and create employment.”It will attract investment in a variety of industries, including the production of agri- chemicals and agro-processing initiativesâ€¦ To support the proposed infrastructure investment, Nkomazi municipality has made land available for the establishment of the SEZ.”Mabuza said the process for the acquisition and registration of land for the Mpumalanga International Fresh Produce Market had been concluded. “All the necessary statutory compliance matters such as the environmental impact assessments have been finalised.”The fresh produce market was a major infrastructure initiative to support agricultural production and create a logistics platform for the export of fresh produce to international markets. This market would create the required infrastructure and logistics platform to assist vegetable, fruit, citrus and meat production farmers and remove the current barriers to market.Construction of the market would begin in the next financial year, Mabuza said.