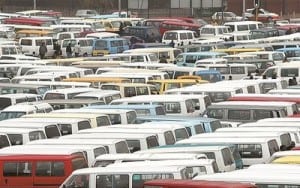 GAUTENG is at an advanced stage of talks to subsidise taxis and integrate the industry into a transformed transport system.

This is according to Gauteng premier David Makhura, who on Sunday spoke to residents in Mamelodi, Pretoria, where violent scenes unfolded last week after the withdrawal by Putco from some bus routes and the temporary takeover by Autopax.

Commuters in Mamelodi have been left stranded since Wednesday, when taxi drivers prevented Autopax from taking over routes vacated by Putco.

Autopax, a Passenger Rail Agency of SA subsidiary, was granted a three-month licence to operate routes vacated by Putco in the capital and East Rand.

But this was met with fierce, and often violent, resistance by taxi associations, which have expressed interest in taking over from Putco and said they had enough vehicles to meet demand.

Four Autopax City to City buses were on Friday pelted with stones and other objects when protesting taxi drivers barricaded the Mamelodi depot and prevented the buses from leaving.

In another incident, four commuters were wounded when shots were fired at a Putco bus in Solomon Mahlangu Drive, Nellmapius, Pretoria.

The driver was shot in the chest and is in a critical condition.

The government has responded to the crisis by rolling out Operation Fiela â€” a joint police, military and home affairs law enforcement exercise â€” to restore calm.

Mr Makhura said although the provincial government had taken note of taxi associationsâ€™ demands, it would not negotiate with people “who are holding us to ransom at gun point. We have met with taxi associations. We are putting plans (in place) to figure out how to subsidise them.

“They know how far we are in the process,” Mr Makhura said. “But there are issues with the associations that must improve.

“Their taxis must be roadworthy, their drivers professional, and they must be willing to be on time,” he added.

Gauteng transport MEC Ismail Vadi said it would be impossible for taxis to replace buses and expect to operate in the same manner.

“We must find a suitable bus company to take over the routes. Taxis are not equivalent to those buses,” he said.

The City of Tshwane is scheduled to continue talks with associations today in an attempt to end the violence.

Tshwane mayor Kgosientso Ramokgopa called on taxi owners and the community to work with the government. “Violence will not resolve anything. It will cause divisions between residents and taxi bosses,” said Mr Ramokgopa.

But the taxi industry remains unmoved and on Friday issued an ultimatum, saying it should be allowed to operate on the subsidised routes, failing which the government would face a revolt.

Gauteng Taxi Alliance general secretary Alpheus Mlalazi said they would not back down on demands to operate the subsidised routes.

“We are mobilising for mass action. Government must guarantee us that when Autopaxâ€™s three-month contract expires, it will not be renewed and we will take over,” Mr Mlalazi said.

“We are willing to operate buses if that is what they want us to do. But we do not want to be left out in the cold any more.”