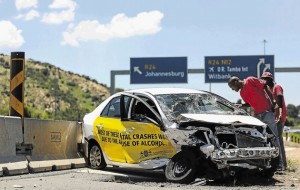 The Department of Transport said yesterday that between December1 and December30, 1143 people were killed in 924 crashes. File photo
Image by: MOELETSI MABE

The death toll on the roads has declined marginally, with 25 fewer deaths compared to the corresponding period last year.

Traffic police are on high alert as traffic volumes are expected to increase this week as holidaymakers return to the big cities.

The Department of Transport said yesterday that between December1 and December30, 1143 people were killed in 924 crashes.

The previous year there were 1168 fatalities, 50 more crashes and 25 fatalities.

The MooiRiver toll plaza, on the N3 highway, in northern KwaZulu-Natal, yesterday afternoon recorded an average of 1030 vehicles passing through each hour; 1260 vehicles an hour passed through the Tugela plaza, in Mnambithi, and 980 an hour through the De Hoek plaza, in Heidelberg.

The N3 is the main artery linking Johannesburg and Durban.

Traffic volumes surged to 1786 an hour at the Middelburg plaza on the N4 toll road between Gauteng and Mpumalanga, late on Sunday.

Other busy national routes were the N1 between Gauteng and Limpopo, the N12 to North West.

“This time 65% of crashes were in urban areas. [Most of them] occurred between 4pm and 3am.

“This tells you that people were driving home from shebeens while drunk,” he said.