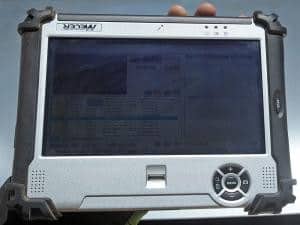 Specialised tablet used to operate the Average Speed Over Distance camera network system, which also alerts the user to vehicles that are flagged on eNatis. File Photo: David Ritchie

Johannesburg – The Road Traffic Management Corporation has been accused of attempting to hijack the Electronic National Administration Traffic Information System.

A legal battle has been raging between a private company, Tasima, which runs the eNaTiS system, the department of transport and the RTMC.

Tasima has been running the system for the past 10 years, but the contract expired and it is running on a month-to-month basis.

The Department of Transport refused to renew it, wanting to take it over themselves, but there have been legal battles about how the handover should take place.

However, in a shock move on Friday, there was a mass resignation of staff from Tasima.

A source said the RTMC had offered a large number of specialised staff members employment.

An employee who did not want to be named said: â€œIt is a highly specialised system which took years to set up. Now the staff are being poached by the RTMC.â€

Eyewitness News reported on Tuesday morning that Tasima chief executive Denesh Naran said an internal e-mail was sent to staff on Friday stating that the immediate resignations were unlawful.

In several e-mails to staff over the past month, Naran said any attempt by the department or the RTMC to take control of their premises or evict Tasima would be unlawful and in contempt of court.

The issue of the transfer of eNaTiS is still before the courts and Tasima is still in possession of and still continues to operate the system. Calls for a request for comment to Naran remained unreturned.

Simon Zwane, spokesman for the RTMC, said the resignations had nothing to do with the corporation.

â€œWe cannot comment on their internal issues,â€ he said.