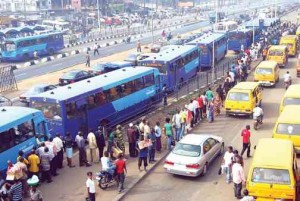 The scarcity is such that there has been as much as a 100% increase in transport fares as charged by commercial bus drivers. This has in turn led to a higher preference by commuters for BRT and LAGBUS services.

The BRT and LAGBUS vehicles are operated by the Lagos state government and as such their fares havenâ€™t been increased.

We gathered that some commuters now have to stand inside the luxury buses to go to and return from work. â€œThe situation is getting out of hand,â€ Patrick Asuamah, a commuter returning from work said. â€œSomething has to be done about this fuelÂ wahala.Â The matter has passedÂ be careful.â€

Another commuter, Mr. Shina Atolagbe toldÂ TheÂ Vanguard Newspaper,Â â€œeverybody will want to save money; I am here because yellow (commercial) buses are scarce and their fares high.â€ Miss Bola Fasanya added that the high cost of commercial buses leaves no option but for one to await the arrival of a BRT or LAGBUS vehicle, no matter how jam-packed.

Mr. Atolagbe added that â€œIt takes stamina to struggle to enter commercial buses; if you are not very strong, donâ€™t go near nowadays, particularly in the rushing hours; you need to queue here.â€