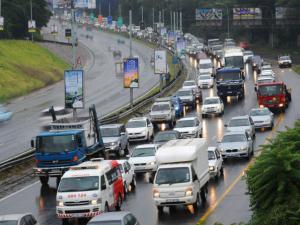 AGING infrastructure, weather conditions, vandalism and theft are causing serious nightmares for the Johannesburg Roads Agency (JRA) in improving the traffic signalling system in the city.

The City of Johannesburg is known for flashing lights each time it rains. This is despite the fact that traffic signal infrastructure is designed to be waterproof.

Some of the control boxes used for traffic signals are more than 30 years old and the cables are not properly insulated, as they were installed 70 years ago.

It costs JRA between R100,000 and R300,000 to replace a traffic light which has been vandalised or hit by a car. In a month, about 70 traffic signal poles are knocked over through accidents and 20 traffic signals are vandalised.

There is also damage caused by the cityâ€™s other agencies such as Johannesburg Water, City Power and broadband companies digging trenches next to the traffic lights, which cause water to get into the infrastructure.

JRA head of mobility and freight Darryll Thomas said by end the of July JRA would have completely replaced the old control boxes and a year later, the agency would have removed all the old cables.

“Once we have covered that, then our traffic signals will be fairly waterproof,” he said.

But rain and water are not the only problems. Lightning hits the traffic signal boxes despite each pole having a 1.5m rod, which is meant to provide lightning protection.

Mr Thomas said below ground there is a high electrical charge which makes the rod ineffective as the lightning fails to go deep into the ground.

JRA will now install below the surface earth mats which will give space for the lightning to go togo. A tender for this project has been advertised.

The agency also plans to invest in a remote monitoring system which will allow all traffic lights to send a direct signal to the control centre each time there a problem. A similar system has been tried in the past using SIM cards but these were all stolen.

Mr Thomas said the new technology will use a micro-SIM which cannot be used in cellphones. JRA expects to have 75% of traffic signals with the technology by the end of the year.

To fight vandalism, JRA has started installing cameras around hot spots, vibration detectors on the poles and a 24-hour armed response.

More money will also enable innovation for traffic lights to be sensitive to traffic flows, time and day of the week.