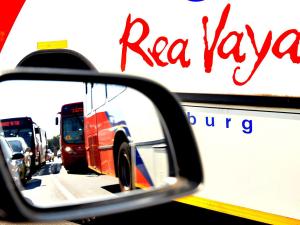 This is just one oof its proposals to Sanral aimed at helping highway congestion and alleviating the burden on the cityâ€™s roads due to diversion of traffic by those trying to avoid the tolls.

Itâ€™s part of an integrated transport plan framework that sets out the cityâ€™s objectives, its vision for its transport system and the strategies it intends to pursue to achieve them.

The framework outlines some of the major developments and failures over the past 10 years which have left the city with fragmented public transport and clogged roads.

In 2006, the right-hand lanes of the Ben Schoeman highway were demarcated to allow only public transport and vehicles with more than three passengers to travel in them.

Electronic signs along the freeway indicated when the lanes would be restricted: on weekdays from 6am to 9am, from Pretoria to Johannesburg, and 3.30pm to 6.30pm from Johannesburg to Pretoria.

Although the pilot of the high-occupancy vehicle lanes was hailed as a success, it was not implemented. Now the city says the lanes will be â€œsuitable for express, inter-city and intra-Gauteng servicesâ€.

The council says Sanral had agreed that the goal was to increase the number of public transport vehicles using the Gauteng freeway network, which would, in turn, warrant implementing dedicated public transport lanes and park and rides along the freeway system.

Johannesburg has a population of more than four million and projections show this is expected to reach eight million by 2040.

Most commuters use minibus-taxis with an estimated 32 taxi associations controlling 1013 routes. The city estimates there are at least 12 300 short-distance taxis operating on various routes.

Public transport demand in Johannesburg is projected to more than double over the next 25 years.

The city intends to extend its existing dedicated lane for use by Metrobus down Eloff Street to new areas where commuters are obliged to use their cars because of a lack of bus service in the south, south-east, north and north-west.

Rea Vaya will remain the councilâ€™s choice for mass public transport for its busier routes, particularly those which can deliver up to 12 000 passengers during peak hours.

The city has said it looked at the feasibility of provincial or local control over trial routes once research has been done.

The framework also reveals the city has had difficulty in integrating its current Rea Vaya with the Gautrain due to different fare systems.

The council says it wanted to see a single fare system for the two and persuade Gautrain to allow non-rail users to use its buses at more affordable fares.

â€œThe emptiness of the Gautrain buses is a waste of resources.â€

Transport analyst Dr Vaughan Mostert said the plan said all the right things but did not pay sufficient attention to the 25-year plan produced by the Gauteng government IN 2013. The city should not plan in isolation, he said, but in conjunction with neighbouring cities such as Tshwane and Ekurhuleni. Fares should be standardised and a smartcard system applied to all areas in Gauteng.

â€œHow did Gautrainâ€™s Mifare scheme slip through? And why is the City of Joburg still getting advisers to â€˜consultâ€™ on the way forward with its own fare integration?â€ he asked.