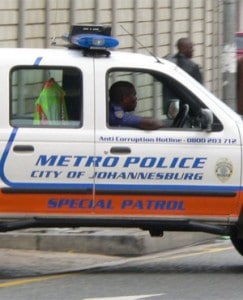 Johannesburg – Johannesburg metro police officers are clamping down on taxi drivers who fail to abide by the rules of the road.

JMPD Chief Superintendent Wayne Minnaar said another taxi driver was arrested on Wednesday after he was caught driving on the wrong side of the road on Jan Smuts in Randburg.

“This brings the total number of drivers arrested to 15 since the operation started,” he said.

During Wednesday’s operations, an unroadworthy taxi was also taken off the road.

The driver was issued a discontinue notice. The vehicle was to be fixed before it would be reissued a license disc.