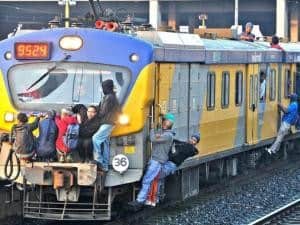 The increase will add 6.5 percent additional revenue to the regionâ€™s coffers.

WHILE Metrorail plans to increase its fares next month, commuters have questioned why more money is not being spent on additional security measures on platforms and in trains.

The annual fare increase will up the cost of single tickets by between 50c and R1, weeklies between R1 and R2 and monthlies between R2 and R38 â€“ depending on travel zone and class, Metrorail said.

Regional manager Richard Walker said: â€œThe cost of operating the current service has burgeoned â€“ major cost drivers such as electricity and safety critical components have increased far beyond the rate of inflation.â€

Walker said without fare increases, the region would have to consider rationalising services.

The increase will add 6.5 percent additional revenue to the regionâ€™s coffers.

Arlene Jacobs said the price hike was unacceptable without more being done to improve safety.

â€œIt is absolutely shocking. If you look at the state of trains, you canâ€™t see out of the windows and the seats are broken,â€ she said.

Jacobs said she was still contemplating whether to get back on a train after her ordeal at the hands of five men who robbed an entire carriage in April.

â€œWe were locked in the coach and five guys with 15cm knives robbed us of our possessions,â€ she said.

She said she was now forced to travel by car and pay between R30 and R50 for parking daily.

Zingisani Nkanjeni, of Public Transport Voice, an organisation that advocates for good quality and safe transport services, said that there was â€œno shortage of cashâ€ at Metrorail and that more should be spent on improving infrastructure and safety.

He said daily train delays also needed to be addressed before fares were hiked.

â€œSecurity guards are posted according to predetermined priority areas. The deployment of these resources is determined by priorities agreed at joint weekly meetings between Metrorail Protection Services and the police,â€ Scott said.

She encouraged commuters to report incidents so that security could be deployed to hot spots.

â€œDuring a recent incident, one of the victimsâ€™ cellphones had a tracking device and as a result the perpetrators were traced, caught and all stolen items retrieved within 90 minutes. Subsequent security deployment on Cape Flats trains has resulted in positive comments from customers,â€ she said.