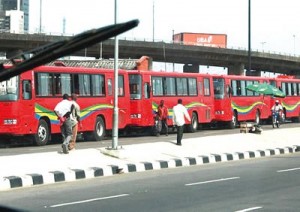 The Bus Rapid Transit (BRT) extension project from Mile 12 to Ikorodu was designed to move more than 300,000 passengers daily.

To achieve this, not less than 400 buses would be required as more passengers are expected to utilise the service in order to beat traffic snarl often prevalent in the area.

Mobereola disclosed this during an inspection tour of the project which has achieved more than 90 per cent completion rate.

Describing BRT project as unique, he said it could be compared to other BRT system other parts of Africa and Asia which are also based on median operation.

â€œIt is a 13.5 kilometre long corridor with 15 bus shelters and a modern bus depot garage built on five hectares of land. There are three terminals at Mile 12, Agric and Ikorodu, six pedestrian bridges at Owode, Irawo, Awori, Majidun-Ogolonto, Agric and Haruna, 12 u-turning points (six on each side), provision of at-grade crossings, street lightings and signalized junctions at Ikorodu, Agric and Ogolonto,â€ he added.

Enumerating the benefit of the project, the LAMATA boss said the BRT median operation has a lot of advantages over the current BRT system from Mile 12 to CMS as it would be faster, safe and efficient.

Mobereola added that modality for employing and training women as drivers, bus assistants and mechanics should be worked out in order â€œto ensure the participation of women in the operation.

His words: â€œThere should be a reasonable number of women in this operation. They could be drivers, bus assistants and even mechanics. Women pay more attention to details. I believe that if the working condition is right, they would like to be part of the bus operation. So I would want the team to come up with modality for achieving the employment of womenâ€.

As the project construction moves towards completion, he appealed for patience, understanding and cooperation from motorists and residents along the corridor to bear with the state government as the contractor working on the project intensifies effort to complete it.

He acknowledged that the project had been a little behind schedule, attributing the delay to weather which impacted negatively on the project completion and assured that itÂ  would be completed before the end of the first quarter of 2015.

According to him, when completed travel time along the corridor would be drastically reduced from oneÂ  hour 30 minutes to 30 minutes, emission cut down by 15 per cent and congestion significantly reduced.Â  Also, over 1, 500 employments would be generated while accessibility to the Lagos Central Business District would also improve.