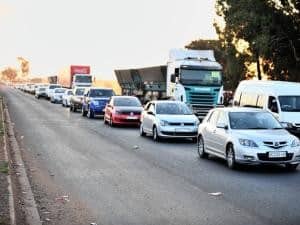 â€œThe roadblocks started at 10pm on Thursday and ended on Sunday night. All those arrested were taken for blood samples and detained at various stations. Their bail was set for R1 500 each,â€ he said.

Three people died in unrelated accidents and another 53 motorists were arrested for speeding.

In addition to the metro policeâ€™s operations, the SAPS announced yesterday it had arrested more than 200 motorists in Gauteng for drunk driving, while 34 were arrested for excessive speeding.

Gauteng police spokeswoman Busaphi Nxumalo said that of the motorists caught speeding, the one going the fastest was driving at 238km/h in a 120km zone.

Nxumalo said more than 230 pedestrians were arrested for jaywalking and drinking in public on Gauteng freeways.

The Road Traffic Management Corporation (RTMC) said yesterday that Gautengâ€™s drunk drivers and speedsters were part of more than 700 motorists arrested for traffic violations, including drunken driving and overloading, during the Easter weekend across the country.

About 1 000 buses and taxis were impounded for travelling with invalid permits.

Police had stopped thousands of vehicles since the start of the holiday.

The campaign was carried out by national police departments and provincial and municipal officers deployed by the RTMC.

He said traffic officers were on the lookout for unroadworthy private and public transport vehicles as well as motorists who disobeyed the rules of the road. â€œMore than 700 motorists have been arrested for different traffic violations, ranging from drunk driving and speeding to overloading, since the start of the holiday period.

â€œClose to 350 vehicles were declared unfit to be on the road. Owners will have to fix all the defects and subject their vehicles to roadworthy tests before they can use them again,â€ he said.

Zwane said owners of vehicles with invalid permits were ordered to pay fines ranging from R2 000 to R2 500 to get their vehicles back.

In Ekurhuleni, road accidents claimed the lives of three people, while 57 drunk drivers were arrested at roadblocks.

A total of 33 drunk drivers were arrested between Thursday and Friday morning.

Ekurhuleni police spokesman Chief Superintendent Wilfred Kgasago said 15 motorists were arrested in Edenvale, 11 in Kempton Park, six in Benoni and one in Springs.

â€œFurthermore, between Friday midday and Saturday night, five arrests were made for drinking and driving in the Kwatsaduza (an informal settlement) area, one in Vosloorus and 13 in Germiston North.

â€œIn and around the Chief Luthuli informal settlement, five more drivers were arrested for drinking and driving,â€ Kgasago said.

He said a man was arrested for allegedly being in possession of a fake driving licence.

Operation â€œZeroâ€ for zero fatalities, which was launched before the Easter weekend by the Department of Transport and Public works, has been hailed as a success, says Western Cape traffic chief Kenny Africa.

Although the targeted zero fatalities was not reached, the number of road deaths was slightly less than that recorded last year.

Africa said 25 fatalities were recorded, two down from last yearâ€™s 27.

â€œAbout 50 percent of the fatalities were pedestrian-related accidents, one driver was killed and the rest were passengers. Most of the accidents occurred in the metro in areas such as Philippi, Mowbray, Manenberg and Parow,â€ he said.

Africa said he was pleased with motorists because they were respecting the road and the number of usually gruesome accidents had declined.

â€œWe had a record number of drunk driving arrests, with 53 drunk drivers arrested and a man was arrested on the West Coast in Vredenburg for speeding. He was doing 129km/h in a 80km/h zone.â€

Africa said this was a busier than usual Easter weekend, but he was proud of motorists and traffic officials.

â€œThe behavioural change in motorists is wonderful. I was on Sir Lowryâ€™s Pass earlier and the traffic was bumper-to-bumper, but there were no motorists who tried taking any chances. None of them lookedÂ cross, they all looked happy, and that is a good thing.â€

Many vehicles drive in and out of the province yearly around Easter. Africa said that outside the festive season it was the busiest time on provincial roads.

â€œThe plan is evidence-driven, and has identified high-risk routes that have seen some of the more serious crashes over the Easter period in recent years. Interventions and resources will be directed strategically to these areas to target the errant behaviour that causes fatal crashes, namely excessive alcohol consumption, fatigue and excessive speeding, which are often both causal and aggravating factors to injury or death.â€

He said joint operations would focus on issues such as driver fitness, vehicle fitness, compliance, speed and load management.

Last month, 154 people died on Western Cape roads. It was a record death toll for March in the province. -Cape Argus