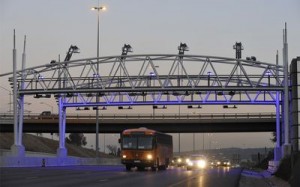 Justice Project South Africa is threatening to seek an urgent high court application to compel the Department of Transport to provide them with the two government gazette notices published about the e-Roads regulations. Picture: SUNDAY WORLD

Johannesburg – A new fight is brewing between Justice Project South Africa and the national Transport Department over proposed amendments to the National Road Traffic Regulations to cater for the withholding of vehicle licence renewal discs because of outstanding e-toll bills.

Howard Dembovsky of Justice Project South Africa said yesterday that the publication of these proposed amendments for public comment on July 17 referred to â€œregulation 11 of the e-Road Regulations, 2015â€, which they had been unable to find anywhere, even on the government website.

Dembovsky said â€œregulation 11 of the e-Road Regulations, 2015â€ had either been â€œsneakily pushed throughâ€ or did not exist, in which case the proposed amendments published for comment on July 17 could not make reference to them.

He said if any amendment to the e-Road regulations was proposed, it should have been published for public comment and at least 30 days allowed for comments to be submitted.

Dembovsky said he wrote to the department at 9am yesterday to put the department on 24-hour notice to provide them with the two government gazette notices published about the e-Road regulations.

â€œIf the department fails to do so or to respond, I will be seeking an urgent high court order to compel them,â€ he said.

The department failed to respond to a Business Report request for comment.

Justice Project South Africa said in an article published on its web page that it had previously stated it would vigorously oppose any amendments to legislation proposing that the SA National Roads Agency Limited should be granted the power to hold motorists hostage by having their licence discs withheld and it stood by that statement.

Wayne Duvenage, the chairman of the Opposition to Urban Tolling Alliance, said he had heard about the proposed amendments to allow for the withholding of vehicle licence renewal discs because of outstanding e-tolls bills but had not yet seen them.

He said the alliance needed to study them and would definitely submit comment.

The spokesman for the Transport Department, Tiyani Ponto-Rikhotso, said in May that it was anticipated that it would take a maximum of three months to amend the Road Traffic Act regulations to allow for the withholding of vehicle licence renewal discs until outstanding e-toll accounts were paid.

Ponto-Rikhotso said at the time that the department was working around the clock to publish the draft regulations for comment, but would not be cutting any corners and would follow the process as prescribed by law.