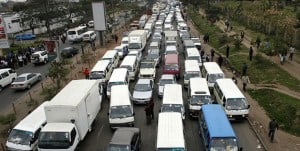 Google and Safaricom have launched Waze,Â a free interactive mobile app that will give Kenyan driversÂ real-time traffic information through crowd-sourced data from other drivers usingÂ the same route, ITWebAfricaÂ reports.

The free GPS-based mobile app is already used by 4.4 million driversÂ in 200Â other countries,Â where it collates information on road conditionsÂ andÂ gives advice on potential alternative routes.

Waze is not new to Kenyan motorists,Â TechMoranÂ reports.Â The app has been freely accessibleÂ since 2010 but wasnâ€™t used in significant numbers.

Google purchased Israeli startup Waze in 2013 for $1 billion, according toÂ TechWeez.Â SomeÂ users appreciate the accuracy of the service, especially in estimating time of arrival.Â  Waze also works as a trip planner, directing you to the cheapest fuel stations and recommended restaurants along your route. The service has been popular in Israel, Malaysia, U.S. and Rio. In Brazil, WazeÂ is integrated with Rioâ€™s traffic management system.

The app is a sign of the evolution of mobile technology, said Sylvia Mulinge, Safaricomâ€™s director of consumer business.

â€œMobile technology has evolved from being just a tool that enables interpersonal communication to being a value-added solution in many sectors,â€ said Mulinge, according to a report in CapitalFM. â€œSafaricom is keen to continue to extend the benefits of our more connected world to our subscribers as we work to transform their lives by putting them closer to critical information,â€

Waze gives users a view of a map that has been layered onto Google Maps using voluntary feedback from Safaricom subscribers.

Waze is available for download on the Android and iOS App Stores. Customers mustÂ enter details of their destination to access traffic information and can passively contribute similar information to other road users by continuing to run as a background application.

Safaricom will start mentioning Waze to its subscribers more often via text and other marketing material, TechMoran reports This is expected to drive up Waze downloads and active users. For Safaricom that means more data revenue. Safaricom has more thanÂ 11 million data subscribers on its network.

Waze will be competing withÂ the popular Ma3Route which is locally developed and uses its Twitter presenceÂ â€“more than 2 million users in the country â€” to crowd source for traffic updates, according to TechMoran. Ma3Route users share information onÂ roadblocks for motorists to avoid, alternative routes, and accidentÂ information.

Waze aims to help motorists calculate the amount of time spent in a trafficÂ jam and update motorists as they move along but Kenyan roads are mostly run by police, especially on roundabouts. Some Waze users have said the app can estimate 10 minutes for a journey that will take two hours and some of its maps to destinations are inaccurate, even if they are powered by Google Map, the WazeÂ parent firm.

Waze launched in South Africa in 2012.