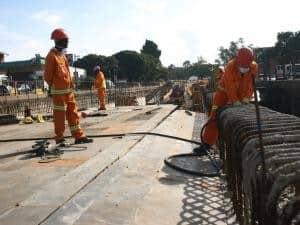 Contractors working on the GO!Durban route in Pinetown that will link the area to KwaMashu. Pictures: Sibusiso Ndlovu

Durban – Work is steaming ahead on Durbanâ€™s ambitious R20 billion public transport system with the first corridor connecting KwaMashu with Pinetown expected to be complete within 18 months.

eThekwini Transport Authority boss, Thami Manyathi, said phase one of the construction, which would incorporate a bus and a rail route, was expected to cost R11bn.

The bus route would connect commuters from KwaMashu to Durban, Pinetown and uMhlanga.

The rail corridor would stretch from KwaMashu via King Dinuzulu (Berea) Road to uMlazi and Isipingo.

â€œThe city has already awarded R2.6 billion worth of contracts, mostly to small businesses from the communities surrounding the project,â€ Manyathi said.

The KwaMashu to Pinetown route, known as the C-3 corridor, was expected to cut the travel time between the two areas from two hours to 40 minutes.

At present there is no dedicated public transport between Pinetown and KwaMashu â€“ except during peak hours â€“ and commuters are forced to travel by minibus taxi to Warwick Triangle and take another to their destination.

A return trip between Pinetown and KwaMashu costs about R54.

Manyathi said that while fares on the GO!Durban system had not yet been calculated the prices would be competitive.

There will be 15 stations on the route accessible to the disabled. A network of taxis will feed passengers to the stations.

The GO!Durban project, known as the eThekwini Integrated Rapid Public Transport Network, when completed in 2027, will connect 600 000 commuters across the city through nine transport corridors.

The network will integrate bus, rail and taxi transportation. The city promises it will be safe and monitored by a control centre and closed circuit television cameras.

It would ensure passengers a wait of no longer than 10 minutes during peak periods and 30 minutes in off-peak periods.

As part of the first phase, bus shelters, dedicated bus and taxi lanes, pedestrian walkways and feeder routes will be built around Bridge City.

Work on the project has recently been marred by opposition from a break-away taxi association and disgruntled community members who stopped construction on part of the project.

Constructions workers and engineers, however, continued digging up pavements, widening roads and blasting through hills along the MR 577 to lay the 26km of dedicated public transport lanes for the route from KwaMashu to Pinetown.

Manyathi said a meeting between residents who stopped construction at some parts of the route and the taxi operators was expected to take place soon.

He said there had been confusion in some communities and among some taxi operators about their inclusion in the project.

â€œWe have in place an empowerment charter that ensures there are accruing benefits for communities where the projects are taking place,â€ Manyathi said.

â€œThe taxi operators along the routes will operate the system when it is up and running.â€

The confusion came about, he said, because they had not understood the construction phase and when they would get to access their opportunities.

â€œI am confident that after the meeting, the project will resume.â€

Bafana Mhlongo, chairman of the KZN Transport Alliance, said not all taxi operators were consulted and called on the city to re-open talks.

â€œWe feel that the city should speak to everyone and allow even the operators to get a piece of the construction. How can they bring construction companies and workers from outside and make them work there? I am writing to the eThekwini Transport Authority and will request they start discussions with us,â€ he said.

Manyathi said the city had been in consultation with taxi operators whose routes were affected and earlier this year signed a memorandum of understanding.

â€œTaxi operators will be the owners of the route. It is as simple as that,â€ he said.