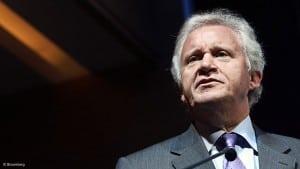 General Electric (GE) chairperson and CEO Jeffrey Immelt has offered some insight, in an essay written for a McKinsey & Company publication titled â€˜Reimagining South Africaâ€™, on how he might personally go about tackling some of South Africaâ€™s major socioeconomic problems, from growth and joblessness to inequality.

There is â€œno single recipe for successâ€, he stressed. However, he argues that successful countries have generally maintained strong and stable macroeconomic policies and have sustained investments in infrastructure, health and education.

â€œCountries that have succeeded have [also] had strong political leadership that made transformative strategic choices, and they have communicated their goals to the public in a way that was credible and gave them license to put through difficult reforms,â€ he writes, while emphasising that â€œitâ€™s easy to give adviceâ€ and more difficult to implement change.

Immeltâ€™s first priority, if he were given responsibility for South Africaâ€™s economy, would be to invest in infrastructure, particularly energy and transportation. â€œWithout it, investors will hold back, and productivity, technology transfer, and trade will all be choked. We are already seeing some of the detrimental effects of the recent recurring power shortages.â€

Noting South Africaâ€™s recent success in attracting renewable-energy investors, Immelt indicates that he would seek to â€œextend the model furtherâ€ so as to leverage private capital and expertise in support of growing generation and further expanding the grid.

â€œIn transportation, South Africa is already reaping benefits from investment in rail-freight services,â€ he writes, highlighting GEâ€™s own role as a supplier to Transnet, as well as its joint $50-million investment with Transnet Engineering (TE) in domestic locomotive assembly operations.

â€œTE is now a leading supplier of locomotives domestically and is expanding with exports to Mozambique and with opportunities in Angola, Botswana, and Namibia.â€

Immeltâ€™s second priority would be to improve the business environment, especially for small and medium-size enterprises (SMEs) that can integrate into local and global supply chains.

â€œSMEs as a whole are abundant job generators and help foster a climate for entrepreneurs to grow and prosper. To succeed, they need to have an environment that provides them with market opportunity and with support to achieve the necessary quality, volume, and reliability to meet the needs of global supply chains.â€

Improving education would be the third priority. â€œSouth Africa needs to educate the next generation of engineers, scientists, and technologists if it is to thrive in the future. This will require a creative and comprehensive approach, especially given the rapid development of technology and the growth of the industrial Internet.â€

Immelt argues that South Africaâ€™s leaders in government and business recognise that current growth patterns will not meet the challenges of the future. â€œSouth Africa needs growth that generates the kind of investment and technology transfer that will lead to long-term increases in economic development and the creation of higher-paying jobs â€” changes that will enable people to transform their lives.â€

By roughly doubling per capita income growth, South Africa could achieve per capita income similar to that of Portugal or Poland in 17 years, he writes, while describing the countryâ€™s National Development Plan vision for the coming 20 years as â€œcompelling and comprehensiveâ€.

â€œSouth Africa has no shortage of challenges, but its people have already proved their resilience, creativity, and ability to envision a better future. The country has surmounted tremendous obstacles, and I have no doubt that South Africaâ€™s political leaders and citizenry will yet again rise to the challenge,â€ he concludes.